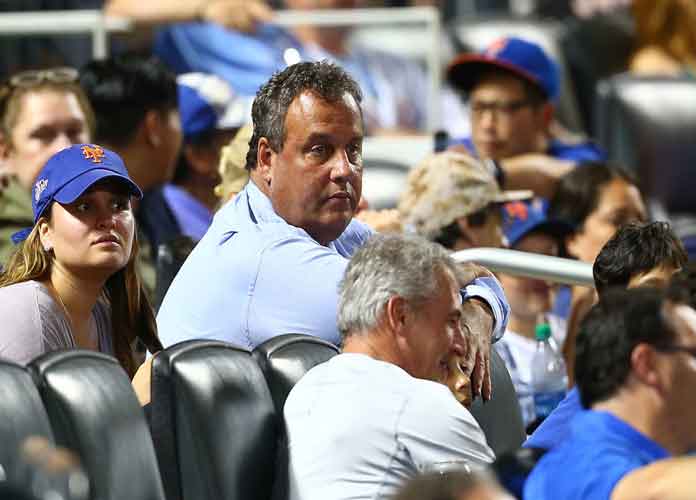 NEW YORK, NEW YORK - JULY 18: Governor of New Jersey Chris Christie attends the game between the New York Mets and the St. Louis Cardinals at Citi Field on July 18, 2017 in the Flushing neighborhood of the Queens borough of New York City. (Photo by Mike Stobe/Getty Images)

Chris Christie was heavily booed and heckled by fans at Citi Field on Tuesday night after catching a foul ball during the New York Mets‘ 5-0 loss to the St. Louis Cardinals.

The 54-year-old New Jersey governor — who was sitting behind the Mets dugout — used his left hand to snag a foul hit from Cardinals rookie Paul DeJong in the top of the third inning, and didn’t even need to leave his seat to make the catch. Christie played catcher for his high school team in the 1980s.

Chris Christie caught a foul ball at Citi Field, then got heavily booed and dunked on by a dopey play-by-play guy pic.twitter.com/n2GpN0EEQd

However, the Republican governor and former 2016 presidential candidate received several high-fives and eventually gave the ball to a young child.

Chris Christie just caught a foul ball at the #Mets game. He was booed, but he did give it to a kid.

Even the announcers couldn’t help but poke fun at Christie, who has recently made headlines for several different reasons.

“Nice to see him get from the beach here to the ballpark,” Fox Sports’ Dan McLaughlin said as his co-commentator laughed.

McLaughlin was referring to a recent controversy Christie found himself in: the governor and his family were photographed relaxing at Island Beach State Park over the July 4 holiday weekend, the same weekend Christie shut down access to the beach for the rest of the public.

Baseball fans also quickly jumped on Twitter to make jokes about another of the governor’s scandals: Christie’s aides’ intentional closing of several lanes of the George Washington Bridge in September 2013. This incident created severe traffic jams in the Fort Lee area of New Jersey and resulted in investigations and indictments of several members of Christie’s staff. Christie and his aides allegedly shut down the lanes as a way to retaliate against Fort Lee’s Democratic Mayor Mark Sokolich and other who did not support Christie’s re-election bid for governor.

Christie cites the so-called “Bridge-gate” controversy as one of the primary reasons for which he lost the 2016 Republican nomination for President. The governor eventually supported the nominee, President Donald Trump after dropping out of the race.

True story: Chris Christie just caught a foul ball at the Mets game. Emails show he shut down the whole aisle to be sure he got it pic.twitter.com/BPVTrB4Fgh

Chris Christie is at the @Mets game. Can anyone confirm if the Shea Bridge is still open?

Christie also recently revealed he hopes to pursue a career as a sports radio host, and has emerged as one of the top candidates to replace longtime WFAN radio host Mike Francesca. The Republican’s second term as governor of New Jersey ends in January.

The Mets (41-50, 4th in National League East) next host the Cardinals again on Wednesday at 7:08pm for the second game of a three-game series.