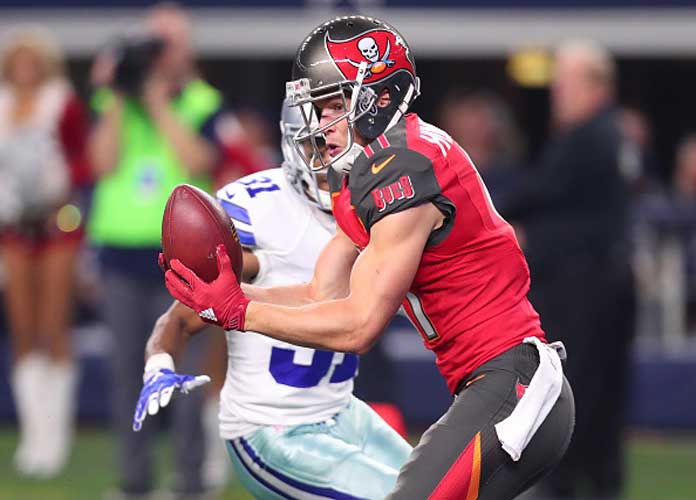 ARLINGTON, TX - DECEMBER 18: Adam Humphries #11 of the Tampa Bay Buccaneers catches a tipped pass for a touchdown during the third quarter against the Dallas Cowboys at AT&T Stadium on December 18, 2016 in Arlington, Texas. (Photo by Tom Pennington/Getty Images)

Jameis Winston is known for taking chances, which is why he entered Sunday’s game against the Dallas Cowboys with 27 career interceptions in 29 starts. That day in Dallas, however, one of the Tampa Bay Buccaneers quarterback’s gutsiest passes paid off to nab his team a very lucky touchdown.

Trailing 17-6 early in the third quarter, Winston rolled to his left on a third-and-1 and tossed a deep pass to Adam Humphries in the end zone.

At first, it seemed as if the pass was bound to end in an interception, but Cowboys cornerback Brandon Carr was unable to catch the ball while jumping, and instead simply managed to tip it. Humphries took advantage of the deflection and snagged the ball to Cut Dallas’ lead to 17-13 with the 42-yard touchdown.

In case it wasn’t completely clear in the video, this photo shows how lucky Winston got:

On Tampa Bay’s subsequent drive, Winston again delivered, although not even partly because of luck. He connected with Cameron Brate for a go-ahead TD and gave the Bucs their first lead since early in the second quarter.

Dallas quarterback Dak Prescott completed 89 percent (32 of 36) of his passes– the second-highest mark in NFL history with a minimum of 30 attempts– for a total of 279 yards. WIth his performance, Prescott broke a streak of less than 200 passing yards.

Prescott was helped by another rookie, star running back Ezekiel Elliott. The MVP candidate hurdled for a career-high 159 yards and a touchdown, easily maneuvering past the Bucs’ defense.

The Cowboys converted two Winston turnovers in Tampa Bay territory– one strip sack and one interception– into 10 points.

Dallas’s Dan Bailey is no longer the most efficient field goal kicker in NFL history. After Bailey missed two 50-plus-yard attempts in the first half, that title now belongs to the Baltimore Ravens’ Justin Tucker, (89.6 percent) who missed his first field goal this season against the New England Patriots in Week 14.

The Buccaneers (8-6) continue seeking a playoff berth, while the Cowboys have already long secured theirs.

And yet, some Cowboys fans seemed to have doubted the team, so wide receiver Dez Bryant decided to call out all those fans.

“I’m talking to the fake Cowboy fans, I’m talking to the bandwagons, I’m just talking about everybody,” Bryant said angrily after the game. “First off, just jump off. Jump off. Like, we lost one game. We were 11-2. Like c’mon, man, this guy put us in this position and you just get to talking crazy. You know, we have one bad game, it’s crazy.”

Bryant was evidently referring to the Cowboys’ road loss against the New York Giants last week, their second defeat of the season (which happened to be against the same team).

The Cowboys will next host the Detroit Lions on Monday, Dec. 26, while the Bucs will visit the New Orleans Saints on Saturday (Christmas Eve).

ARLINGTON, TX – DECEMBER 18: Adam Humphries #11 of the Tampa Bay Buccaneers catches a tipped pass for a touchdown during the third quarter against the Dallas Cowboys at AT&T Stadium on December 18, 2016 in Arlington, Texas. (Photo by Tom Pennington/Getty Images)