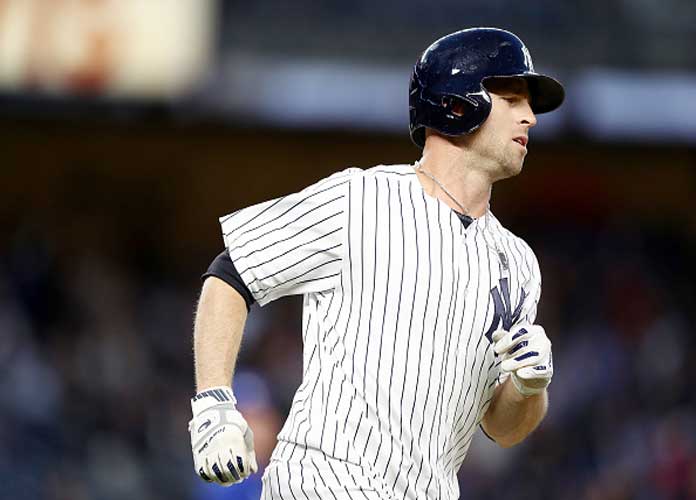 NEW YORK, NY - MAY 02: Brett Gardner #11 of the New York Yankees rounds first after he hit a two run home run in the second inning against the Toronto Blue Jays on May 2, 2017 at Yankee Stadium in the Bronx borough of New York City. (Photo by Elsa/Getty Images)

The New York Yankees thrashed the Reds 10-4 in Cincinnati on Monday evening, one day after edging the Chicago Cubs 5-4 in a six-hour, 18-inning game at Wrigley Field that kept the Bombers up nearly all night.

One of the major contributors to the Yankees’ victory Monday was Brett Gardner, who blasted a two-run high drive to right field off Barrett Astin in the eighth inning to put New York up 9-4.

Matt Holliday scored the winning run for the Yankees, a solo homer to straightaway center field off Astin in the eighth, to give New York (21-9, 1st in American League East) their sixth consecutive victory and snap Cincinnati’s five-game winning streak.

The Yankees are still a half-game ahead of Baltimore for the top spot in the AL East, while the Reds fell to second place in the National League Central, a half-game behind St. Louis.

Masahiro Tanaka (5-1) was also great for the Yankees, tossing seven dominant innings during which he allowed four runs (three earned) and struck out six for his fifth straight winning start. The Japanese right-hander threw 112 total pitches.

Joey Votto drove in three off Tanaka with a single and a homer for Cincinnati.

Chase Headley, who turned 33 on Tuesday, was one of three Yankees struck by a pitch from Reds reliever Drew Storen in the seventh. With the bases loaded, Storen hit Headley in the right leg to score Aaron Hicks and push the Yankees’ lead to 6-2. Manager Joe Girardi said he will rest Headley for one day, adding he had already planned this.

“I was planning on giving him a day off [Tuesday],” Girardi said of the third baseman. “He’ll definitely get it now.”

Here’s a fun fact about Headley, who hails from Colorado:

🎉Did you know that Chase Headley, born OTD in 1984, owns the most career hits, RBI and HRs by a Colorado-born player? Happy birthday, Chase! pic.twitter.com/r4irlsN3E9

Cincinnati’s Arismendy Alcantara pinch-hit in the fifth inning by delivering a single to right field. The Dominican second baseman thus extended his streak of hits to seven straight plate appearances with a hit, the longest active streak in the Majors.

The last Reds player to accomplish this was Steve Selsky last September. Before that, Bip Roberts recorded hits in ten straight plate appearances for Cincinnati from Sept. 19-23, 1992.

The Yankees and Reds will face off again at Great American Ball Park for the finale of the two-game series on Tuesday at 7:10 pm EST. CC Sabathia will make his first career start since 2013 and his 13th against Cincinnati. Righty Tim Adleman will take the mound for the Reds. Adelman delivered a stellar 88-pitch performance against Pittsburgh on Thursday, allowing two runs on six hits in six innings in a 4-2 victory over the Pirates.

NEW YORK, NY – MAY 02: Brett Gardner #11 of the New York Yankees rounds first after he hit a two run home run in the second inning against the Toronto Blue Jays on May 2, 2017 at Yankee Stadium in the Bronx borough of New York City. (Photo by Elsa/Getty Images)