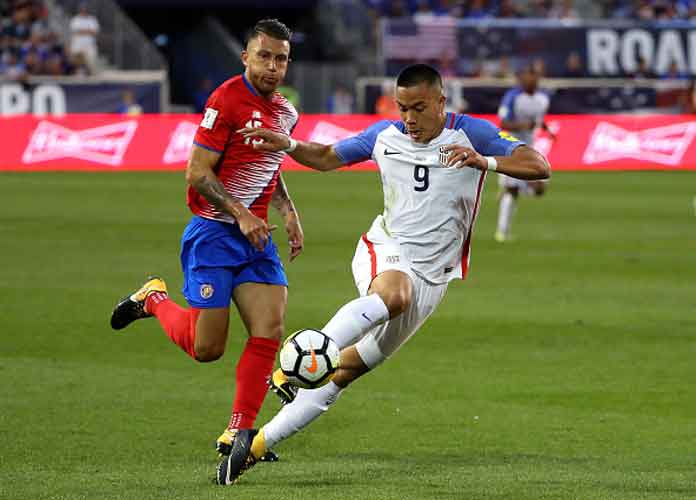 HARRISON, NJ - SEPTEMBER 01: Bobby Wood #9 of the United States controls the ball against Francisco Calvo #15 of Costa Rica in the first half during the FIFA 2018 World Cup Qualifier at Red Bull Arena on September 1, 2017 in Harrison, New Jersey. (Photo by Mike Lawrie/Getty Images)

Bobby Wood scored a late goal in the U.S. Men’s National Team’s game against Honduras at Estadio Olimpico in San Pedro Sula on Tuesday night to close out a 1-1 tie and avoid a decrease in the Americans’ chances of qualifying for the 2018 FIFA World Cup.

Had the USMNT lost — combined with a potential victory from Panama later on Tuesday (the country indeed defeated Trinidad & Tobago 3-0 on Tuesday) — the Americans would have found themselves in fifth place in the six-country North/Central American and Caribbean qualifying group, two points behind the fourth-place team. Thus, the U.S.’s chances of qualifying for next year’s tournament in Russia would have been slim to none, especially after their 2-0 loss to Costa Rica at Red Bull Arena on Friday.

Instead, the U.S. is now fourth in the table with nine points, behind third-place Panama (ten points), second-place Costa Rica (15 points) and leaders Mexico (18 points). Mexico and Costa Rica tied 1-1 on Tuesday.

After Honduras’s Romell Quioto opened the scoring in the 27th minute, Wood netted the equalizer in the 85th minute following a scramble after a saved Kellyn Acosta free kick.

The U.S.’s first real shot on goal, however, came in the 20th minute. Christian Pulisic deftly maneuvered past several Honduran defenders, then chipped the ball to Dempsey, who attempted to score through traffic while drawing contact. Dempsey was not whistled for his foul, however, and goalkeeper Luis Lopez easily caught the ball. Shortly before Dempsey’s shot, the Sounders forward took a cleat to the head from Jorge Claros, who received a yellow card.

Brad Guzan made a key save on a low shot from Elis in the 23rd minute, and Quioto hit a volley above the crossbar from six yards out shortly afterwards. However, Quioto — a Dynamo forward scored soon afterwards. U.S. defender Omar Gonzalez failed to make a key tackle and Quioto beat Guzan from close range.

WATCH: Romell Quioto puts the #USMNT in an early hole in San Pedro Sula (via @beINSPORTSUSA)pic.twitter.com/qVZwneBIdW

Jozy Altidore was suspended for Tuesday’s game due to card accumulation.

“There’s not even a crack open in the door to Russia for us,” USA coach Bruce Arena said in his post-game press conference. “That’s a huge point for the U.S. team. The conditions were challenging for both teams. I’m really proud of our team.”

The U.S. routed Honduras 6-0 in their previous meeting in San Jose, California in March (the earlier part of this fifth and final World Cup Qualifying round). Now, the Americans will face tough contests for their final two qualifying games against Panama and Trinidad & Tobago in October.

The Americans will face Panama in Orlando on Oct. 6 and travel to play Trinidad & Tobago on Oct. 10.

HARRISON, NJ – SEPTEMBER 01: Bobby Wood #9 of the United States controls the ball against Francisco Calvo #15 of Costa Rica in the first half during the FIFA 2018 World Cup Qualifier at Red Bull Arena on September 1, 2017 in Harrison, New Jersey. (Photo by Mike Lawrie/Getty Images)