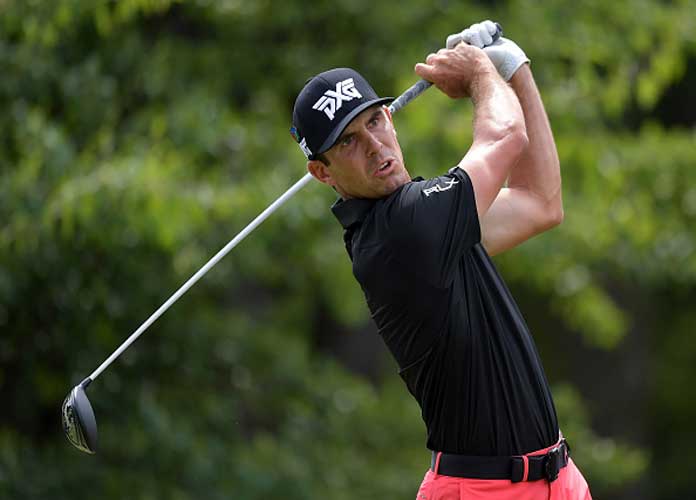 IRVING, TX - MAY 21: Billy Horschel plays his shot from the 11th tee during the Final Round of the AT&T Byron Nelson at the TPC Four Seasons Resort Las Colinas on May 21, 2017 in Irving, Texas. (Photo by Drew Hallowell/Getty Images)

Billy Horschel sank a 60-foot birdie putt at Hole No. 14 at TPC Four Seasons in Irving, Texas on Sunday to tie the lead and eventually defeat Jason Day for his first AT&T Byron Nelson title.

The 30-year-old Florida native had missed the cut in his last four starts, and won the tournament after Australia’s Day hit his 4-foot par putt left of the 18th hole.

Horschel had advanced after finishing with a 5-under 65 on Friday and birdying his last three holes on Saturday to earn a playoff spot alongside Day and South Korean-born American James Hahn.

The LONGEST putt of his career …

“When I hit it I knew it was on a perfect line and I thought I got it to the hole. … I just wanted to finish it off there,” Horschel said, before expressing surprise at Day’s final miss. “I didn’t expect him to miss it. I was expecting to go back to the tee and play the hole again.”

The victory marked Horschel’s fourth PGA Tour title and first since 2014, when he won the Tour Championship and BMW Championship. In his only two past Nelsons (2011 and 2012), he missed the cut at 13 over through 36 holes both years. Sunday’s Nelson was the 35th and final such tournament to be played in Irving. Next year, the competition will be held at Trinity Forest Golf Club south of downtown Dallas.

Hahn, who led in the third round, finished one stroke behind after shooting 71. He narrowly missed an eagle at Hole No. 18 that would have landed him in the playoff with Horschel and Day.

The 35-year-old Seoul native, who was seeking a PGA Tour triumph in his third straight season, held the 54-hole lead but bogeys on Nos. 12, 13 and 14 ruined his chances. Hahn also delivered a great effort on the 72nd hole:

.@JamesHahnPGA needed to hole THIS to have a chance at a playoff.

The reactions say it all. #QuickHits pic.twitter.com/Ic1ezB3PMF

Day, who won the first of his ten PGA titles at Irving in 2010, only led once on Sunday. when he pitched in from 78 feet from the rough by the green-side bunker at the 477-yard 15th.

However, at Hole No. 16 — one of the easiest at TPC Four Seasons — the Australian World No. 4’s wayward tee shot struck a spectator. Day walked over to the woman to ensure she was unhurt, then hit an approach that settled on the green, although a 9-foot birdie chance sat right beside the hole.

“I only had one top 10 up to this point. To be able to play the way I did today, I played some good solid golf,” Day said. “It’s a little disappointing, but it’s not the first tournament I’m going to lose. … I feel good about my game.”

Earlier this year, Horschel crashed out of a five-golfer playoff at the RSM Classic after he barely missed a birdie putt on the first extra hole, then surprisingly missed a two-foot putt.

Day’s birdie on the 15th hole Sunday was his last of the day but gave him a one-stroke lead.

Making birdie from THERE? Ridiculous!

WHAT A SHOT! #QuickHits pic.twitter.com/yJl4JdtT5M

Sergio Garcia, the defending champion, recorded birdies on six of his final eight holes Saturday to get within four strokes of the lead. The Spaniard’s closing 74 put him 4 under and tied for 20th.

IRVING, TX – MAY 21: Billy Horschel plays his shot from the 11th tee during the Final Round of the AT&T Byron Nelson at the TPC Four Seasons Resort Las Colinas on May 21, 2017 in Irving, Texas. (Photo by Drew Hallowell/Getty Images)