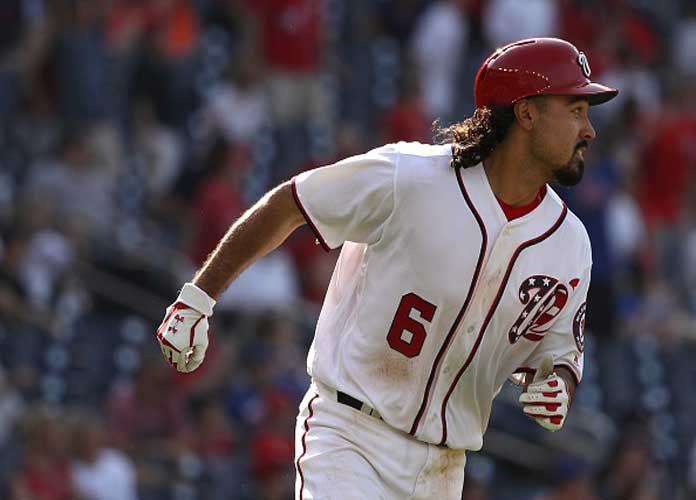 WASHINGTON, DC - APRIL 30: Anthony Rendon #6 of the Washington Nationals watches his solo home run during the eighth inning against the New York Mets at Nationals Park on April 30, 2017 in Washington, DC. (Photo by Patrick Smith/Getty Images)

Anthony Rendon scored ten runs and Bryce Harper set an MLB record for runs in April with his 32nd of the month to lead the Washington Nationals to a 23-5 home thrashing of the New York Mets on Sunday.

Harper had four runs to beat the Major League Baseball record of 29 set by Larry Walker in 1997. His third run came on a bases-clearing double by Rendon, who went six-for-six with three homers to become the first MLB player since ten-RBI game since Garret Anderson in 2007.

The Nationals — who avoided a three-game sweep with the rout — have scored 170 runs through the first month of the season, the most in MLB and the 10th-most for any team since at least 1913. The team’s 23 hits and seven homers were also the most it had since relocating to Washington from Montreal in 2005. According to the Elias Sports Bureau, the Nats are now also the first team in Major League history to score at least 14 runs five times in April.

The 23 runs allowed by the Mets, meanwhile, are the second-highest total in the team’s history. The most is 26 runs surrendered to the Philadelphia on June 11, 1985.

Harper, the 2015 National League MVP, leads all players in on-base percentage (.510) and times reaching base (58). During that MVP season, Harper recorded a .440 OBP and had reached base 44 times once May began.

“That’s probably more important than mine,” Rendon, who recorded his first multi-homer game, said of helping Harper reach that achievement. “Obviously, you want to help the guys because it’s a team game in the end. It’s not like tennis, it’s not golf. There’s nine guys out there on the field. For all of us to come together, that’s what it’s going to take for us to win. That’s more important.”

Rendon’s fifth-inning double off the wall in right-center field to clear the bases not only drove in Harper, but also Trea Turner and Daniel Murphy to give Washington a 13-5 lead. With the hit, which came off Fernando Salas, Rendon just missed a grand slam.

The Nationals scored five runs in the first inning off Noah Syndergaard, who played three days after he was scratched from his previous start with discomfort in his right biceps and a “tired arm.” The Mets right-hander lasted only 1 1/3 innings on Sunday, having exited in the second frame with what the team called a “possible lat strain.”

Backup catcher Kevin Plawecki was forced to replace Syndergaard in the final two innings. Plawecki recorded three straight outs in the Nationals’ five-run seventh, but then struggled in the eighth, when Harper scored a solo homer off him. Rendon and Adam Lind also homered in the eighth, but Plawecki said he was somewhat satisfied with his performance.

“I threw a lot of strikes, I was happy with that,” the catcher said. “I used the whole ballpark the first inning and got out of it and the second inning I left a couple up.”

Matt Wieters also hit one homer in the sixth and another in the seventh, and drove in four runs for runs for the Nationals.

The Mets next make their first trip to SunTrust Park in Atlanta on Monday night to face the Braves at their new stadium in the opener of a four-games series. Rookie Robert Gsellman will start against fellow right-hander Julio Teheran at 7:35 pm EST.

The Nationals have an off-day Monday and then host the Arizona Diamondbacks on Tuesday night for the opener of a three-game series that begins at 7:05 EST. Tanner Roark will start against righty Taijuan Walker.

WASHINGTON, DC – APRIL 30: Anthony Rendon #6 of the Washington Nationals watches his solo home run during the eighth inning against the New York Mets at Nationals Park on April 30, 2017 in Washington, DC. (Photo by Patrick Smith/Getty Images)