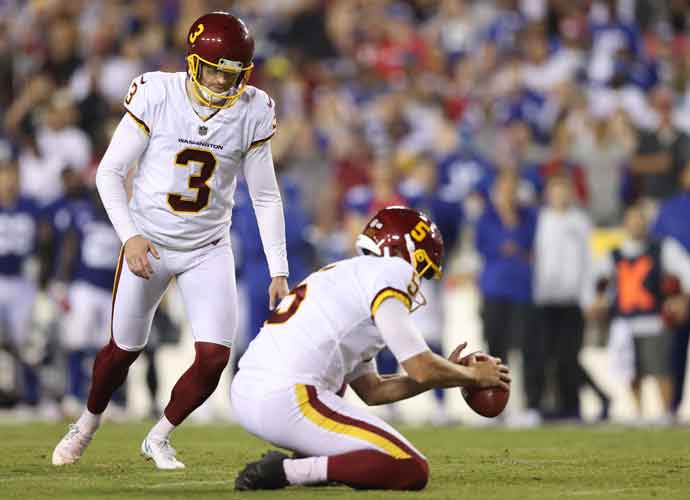 LANDOVER, MARYLAND - SEPTEMBER 16: Dustin Hopkins #3 of the Washington Football Team kicks a field goal to win the game 30-29 against the New York Giants at FedExField on September 16, 2021 in Landover, Maryland. (Photo by Patrick Smith/Getty Images)

On Thursday Night Football, Washington Football Team kicker Dustin Hopkins sent a clutch 43-yard field goal in between the uprights as time expired to defeat the New York Giants 30-29. Washington caught a lucky break. On the previous play, Hopkins missed a 48-yard attempt, which would’ve given New York the win. However, Giants defensive end Dexter Lawrence barely jumped the line of scrimmage prior to the snap and was called offsides, giving Hopkins a second chance.

While there’s been a lot of controversy centered around whether or not Lawrence actually mistimed the snap, the former Clemson standout is holding himself accountable for the team’s loss. “That’s on me. I gotta be more disciplined in that time, a critical situation,” he said. “I just gotta do better… The refs call what they call.”

The match-up between the two NFC East rivals proved to be a battle amongst two of the best kickers in Florida State football history. Hopkins briefly held the NCAA D1 FBS record for career points scored by a kicker at 448 points before ASU kicker Zane Gonzalez broke it four years later in 2016.

As for the Giants kicker, Graham Gano converted all five of his field-goal attempts, including a 55-yarder in the fourth quarter, extending his consecutive made field goal streak to 33.