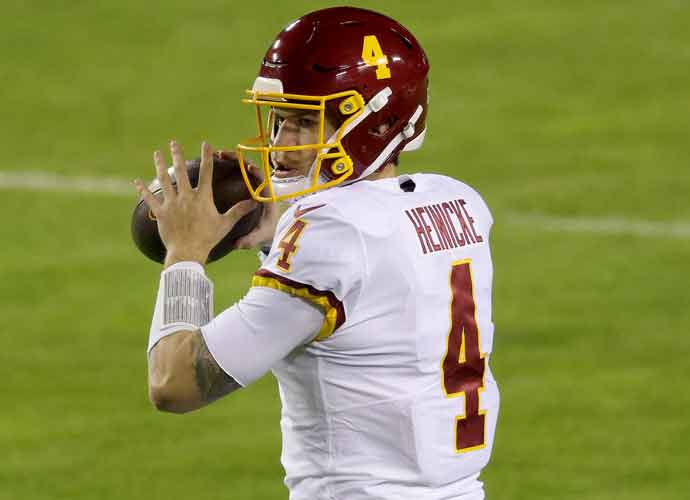 LANDOVER, MARYLAND - DECEMBER 27: Taylor Heinicke #4 of the Washington Football Team looks to pass against the Carolina Panthers during the game at FedExField on December 27, 2020 in Landover, Maryland. (Photo by Will Newton/Getty Images)

The Washington Football Team has signed Taylor Heinicke to a two-year extension worth $8.75 million. The deal includes incentives for a number of games started.

Washington was impressed by Heinicke’s performance when he started in place of an injured Alex Smith during Wild Card weekend. Heinicke was chosen to start the team’s matchup against the eventual Super Bowl champion Tampa Bay Buccaneers. That start happened to be Heinicke’s lone start of 2020.

In his lone start, the quarterback efficient football. He completed 26 of 44 passes for 306 yards, one touchdown, and one interception against the Bucs. Additionally, Heinicke led the team with 46 yards rushing along with a touchdown.

For Heinicke, the contract extension is something that he wanted. The quarterback wanted to remain in Washington because he is fond of head coach Ron Rivera. “I love Ron,” he said. “I want to be back in Washington.”

While there is a possibility that Heinicke could start for the team, it is not certain yet. Furthermore, the team will be looking to add another quarterback with more experience than Heinicke.