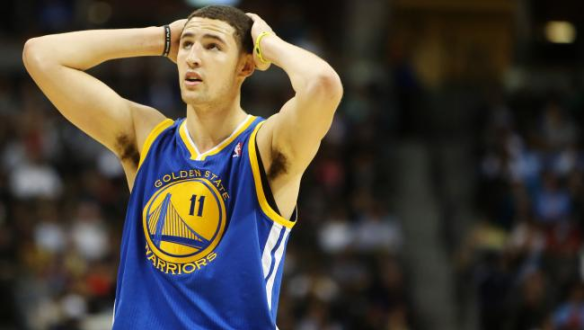 The Golden State Warriors announced Friday that guard Klay Thompson has been diagnosed with a concussion and is out indefinitely. Thompson will not be able to return to the Warriors’ lineup until he clears NBA concussion protocol.

Thompson was injured on Wednesday night in Golden State’s Game 5 victory over the Houston Rockets to win the Western Conference Finals. Thompson took a knee to the head from the Rockets’ Dwight Howard, who did not receive a fragrant when the foul was originally called. The NBA has since given Howard a retroactive “fragrant 1” and will be suspended for the first game of the 2015-16 season.

The injury means Golden State could be forced to start without Thompson if he doesn’t clear the league’s protocol in time for Game 1 of the NBA Finals next Thursday. The Warriors released a statement saying that the team will monitor Thompson’s progress daily and will not put any timetable on his return.

The Warriors won’t be the only injury-stricken team in the NBA Finals, as the Cleveland Cavaliers will continue to play without Kevin Love, who’s been out for effectively the entire playoff run. Steph Curry survived a concussion scare after a hard hit to the head in Game 4 for Golden State, while Kyrie Irving will be in his second game back from injury for Cleveland.