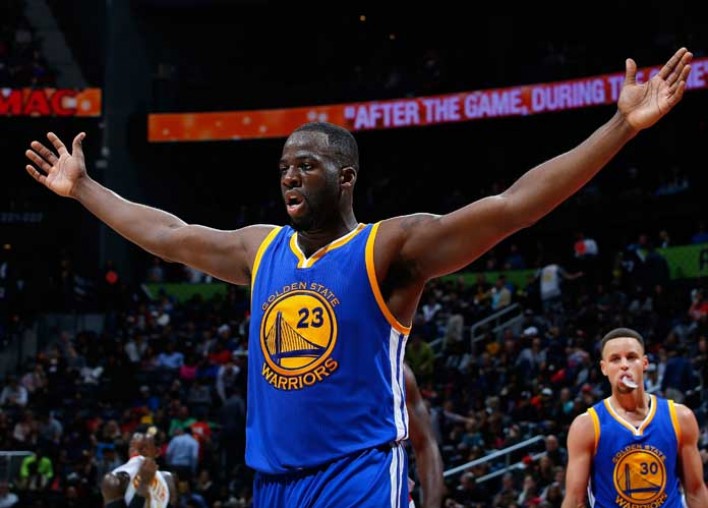 Following the Golden State Warriors’ decisive Game 4 victory over the Houston Rockets on Sunday, which came amidst the loss of reigning MVP Stephen Curry to a sprained right knee, Warriors forward Draymond Green was confronted with an awkward question from a reporter.

The reporter was seemingly attempting to conflate the Warriors’ victory over the Rockets with the dangerous flooding that resulted from the torrential downpours that have befallen the city of Houston over the past week or so. Green did not take the questions that followed very well.

That’s when Green interrupted him.

“Brother, you asked me about the flood in practice the other day,” said Green, who finished with 18 points on 7-for-12 shooting, as well as eight rebounds, six assists and one steal in 35 1/2 minutes in the win. “And I said I pray for the city of Houston, because you don’t want to see anyone go through that. I feel like you keep trying to get at, like, us hitting 3s or something, and you’re trying to get a controversial statement out of me. But you’re not, because I feel sorry for the people of Houston.

“People are losing their homes, losing their cars, losing their lives, losing loved ones. And you’re trying to get a controversial statement out of me about the 3s we’re hitting. I know what you’re getting at, but you’re not getting that out of me. It — it sucks. If I was from Houston, I’d do anything I can to help the city out, and I’m sure some of those guys [the Rockets] are going to do what they can to help the city out. You saw a donation the other night. It sucks.

It is quite common for reporters to search for strong hooks to make their stories unique. However, the difference in this case was that the peg this particular reporter settled on was a natural disaster that has reportedly left eight people dead, some 6,700 homes flooded throughout the county and more than $5 billion in damage. When all this, including human lives, is at stake, it is usually best as a journalist to steer clear of questions about this.

According to CSN Bay Area’s Henry Wofford, the reporter who posed the question that Green refused to answer has been fired:

He’s a 1st year reporter, born and raised in China. He was working for a Chinese publication, but based in Houston. Fired after Game 4.

The Warriors now lead the series against the Rockets 3-1. Game 5 will take place at Oracle Arena in Oakland on Wednesday.

ATLANTA, GA – FEBRUARY 22:  Draymond Green #23 of the Golden State Warriors reacts after being charged with a foul in the final minutes of their 102-92 win over the Atlanta Hawks at Philips Arena on February 22, 2016 in Atlanta, Georgia.