VIDEO: US Olympic Rugby Stars On The Transition From College Athletics - uSports.org 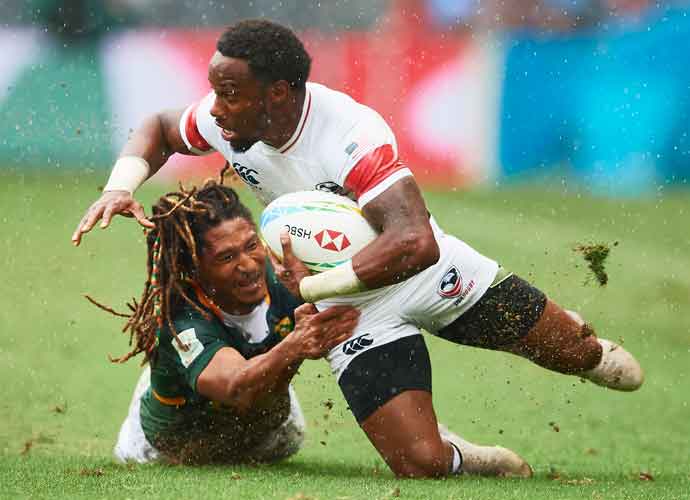 SYDNEY, AUSTRALIA - FEBRUARY 02: Carlin Isles of the USA is tackled during the 2020 Sydney Sevens Semi Final match between South Africa and USA at Bankwest Stadium on February 02, 2020 in Sydney, Australia. (Photo by Brett Hemmings/Getty Images)

Playing college athletics provides a host of benefits to cultivating athletic and personal development. Part of that growth is preparing athletes for future sporting events – with the Olympics being no different.

Wheelchair rugby star Joe Delagrave elaborated on how he persevered over his injury playing football to become a strong force in the Paralympics.

“I played a year in college football as a tight end, thankfully I broke my neck. I say thankfully because I think they would have made me a tackle, they were grooming me, they were giving me extra food in the dorms and everything getting me to be a tackle, so I dodged that bullet having to play in the offensive line but now it taught you hard work,” Delagrave said. “Right away I remember my first practice as a freshman in college and I was playing seven on seven drills and didn’t realize I was lined up against a two-time all-American and he absolutely de-cleated me, I saw the tweety birds and stuff like that and got up and went to the other huddle I went to the defensive huddle. I think I got a concussion, and so it was it was all gravy from there, but no it definitely taught you hard work, it taught you teamwork, it taught you to be where you fit into the puzzle, so I truly cherish my year there in college.”

Naya Tapper, an Olympic hopeful in women’s rugby, utilized her experience as a rugby player in college to better understand the nuances of Olympic-style play.

“I was playing club rugby, 15 specifically where it’s now playing sevens, so for me mainly it showed me how to participate in a team sport because I was mainly in track and field from middle school and high school and that was very individual in my eyes,” Tapper explained. “So having to learn to work with different people and accepting the fact that the outcome of the game isn’t only decided upon your performance but everybody’s and kind of learning to be a lot more selfless was one of the main lessons I learned. And then college exposed me to rugby, it gave me the exposure I needed and the awareness I needed that the sport even existed and that it existed at a professional level where I could also be into the Olympics. So, hopefully, now five years later that has changed for a lot of the younger girls coming up through the college realm and rugby specifically.”

Carlin Isles, a previous and current Olympian for the U.S. rugby team opened up about how college football and track expanded his growth in terms of gameplay and his mentality about competition.

“Well, college helped me big time. I did football and track, so individually to be able to get myself right as a person individually, but then collectively when I played football to be able to collectively come together and work as a team but also still be your individual self also taught me the ability to manage time because I was doing two sports and also to be able to work hard and be able to sacrifice,” Isles said. “As you get older you become a professional athlete … those things that tied into when you play college kind of transferred over to the professional world and to be able to grind and self-motivate and also rely on self and also learn how to rely on teammates so that when a transition happened I kind of took everything that I instilled at a younger age and applied it to when I was older. So, it kind of worked out especially when you play against different people, different sizes, people who were top-notch at this sport or that sport or whatever it is, that when I came on that professional level and I’ve seen that, you know, I was able to back myself and be confident in the ability that I have based off of everything I’ve experienced and went through because I was able to relate and be able to show that, ‘man I did it when it was tough here or tough there, this person maybe was bigger or faster or whatever it is and I came on top.’”

Contrary to his peers, Perry Baker did not see college sports as the primary foundational piece in preparing for Olympic rugby.

“For me, it was a different path, I don’t feel like college helped prepare me for this,” Baker said. “Playing college football just for the simple fact it’s two totally two different sports that I was playing like I played football in college and if you think about college football and playing sevens right now the teams are so much smaller in rugby and in football, the team is so much bigger and in football, you have so much trash-talking, like you’re talking to defensive backs and rugby you don’t have that you’re not trash-talking to like Carl’s my teammate and we compete against each other, we’re not actually trash talking to each other on a regular basis because we’re not going against each other every day, and football you have that every day where you’re a wide receiver, you’re getting challenged by defensive backs and then you have the defensive side versus the offensive side. We don’t have that in rugby so that stuff never really prepared me for this. I would say what did was arena football, because it’s so much smaller and you feel like you’re a team and you’re so much closer. I feel like that’s one of the big things with rugby is you become so close and have that tight net because you’re so much smaller … I just felt like that was the way in arena football …  it taught me and instilled into me where I’m at today and how to be in a professional athlete environment.”