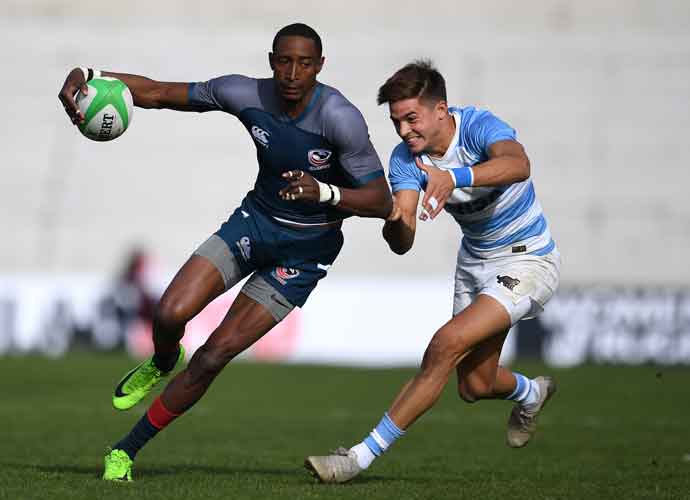 United States Olympic athlete Perry Baker understood the struggle of training during COVID-19, and elaborated on his not-so-traditional means of getting ready for Tokyo.

“First off, you have to take care of yourself individually like stay on your grind stay working out, doing the little things like when no one’s watching and so once we became back to a little group, how we had to do it was we had groups where we broke it up into like probably five people in a group and that was your bubble, you had to stay in that bubble and there was just a lot of passing things – a lot of skillful things – that we’re doing just to stay active since we could not play and have that competition,” Baker said. “Like I said, it all depends on what you’re doing individually so a lot of guys they were ordering weights and had weights come to their house so they could lift at home. They were doing stuff in parks where they were like actually running and and doing our actual technical stuff, so it’s a lot of stuff that was going on. That’s why this Olympics is going to be so sweet when we get selected to go to it, just because of all the hard work that we actually put in like this was nothing, whereas like I was just doing the normal stuff this was actually stuff where you had to figure out ‘how I’m going to do it’ and keep your mental strong.”

Wheelchair rugby star Joe Delagrave commented on his unique COVID-19 training circumstances as well, comparing the similarities and differences between his Paralympic preparation, and those of Olympic rugby players.

“Yeah from the wheelchair rugby side we didn’t see each other for about 10 and a half months and so everything was done on our own,” Delagrave said. “Right away in the beginning of the pandemic, it was Rocky Balboa style, just trying to find different weights. I was lifting my kids, bench pressing my wife sometimes and then getting slowly getting a gym for at home to be able to train and then … just pushing outside in my neighborhood when the gyms were closed and so it was just kind of, you know, dodging people on their bikes and running next to people in the neighborhood and stuff like that, and most people are like ‘oh, Joe’s out training and doing his thing again,’ and some people are like ‘what are you doing in that chair? I have no idea what that is,’ and so just explaining to people that I’m not a wheelchair racer. I think a lot of people in wheelchairs get asked the question if they’re a wheelchair racer and I don’t like running, so I’d rather play a sport than just run, that’s my deal, but yeah just adapting. I think for a lot of us, and you hear it from on the able-bodied rugby side where adapters – they’ve adapted to playing a different sport and then going into rugby same with me, broke my neck when I was 19 and then you adapt and learn to adapt and I think we’re all adapters as athletes. So I think that’s what we did during the pandemic.”