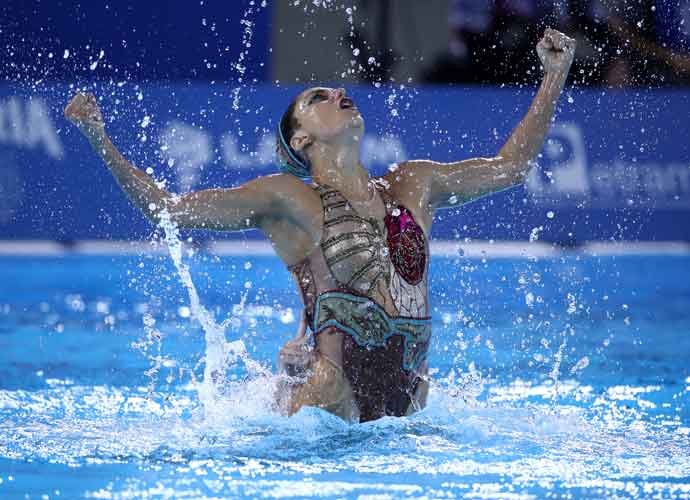 Two star athletes – Anita Alvarez and Dana Mathewson – have been able to perform at the peak of all athletic competition, representing the United States at the Olympics. Critically, they have drawn wisdom and inspiration from mentors and others in their sport, which has been foundational in their success.

Alvarez discussed an inspirational figure foundational to her striving to succeed on the Olympic stage, naming her coach.

“I think actually our current head coach, Andrea Fuentes – she’s an Olympian from Spain, medalist and one of the best most famous well-known artistic swimmers in the world,” Alvarez said. “I grew up idolizing her and looking up to her and then I think in fall of 2018 it was announced that she was going to be our new head coach and you know it’s kind of like when you have an idol for so long and then you meet them and they exceed your expectations of just, you know, not just like a coach and athlete but an all-around human being is just super special and she’s changed kind of like everything in our organization, in our sport and with our national team and the way things are going and especially through this pandemic… She’s up for any challenge and everything that’s been thrown our way through this entire year or past two years you know she grabs it and she runs with it and she goes ‘all right she’s on to the next thing’ you know. She never gets stuck in it and she’s led by example for our whole entire team and for me as an athlete and just kind of helped me to continue on through this next phase … of the Olympics, and to kind of help me to continue growing as an athlete but also learn how to lead my team as well, and it’s been an amazing experience and she’s definitely helped myself and my entire team through this past year especially.”

Mathewson did not have a specific person in mind but instead highlighted the host of highly experienced coaches she was fortunate enough to work with throughout this pandemic, a unique opportunity gifted by an otherwise unwanted disease.

“I don’t know if I have one idol that I’ve really looked up to, but I guess I should explain it differently. In the past leading up to, I guess, just before the pandemic, I did a lot of training by myself – tennis is a little bit hard in that like, you know, affording to travel and also affording to have a coach consistently, it’s not that easy unless you’re at like the top of the ranks. Leading up to this past year I could only really afford to travel, so I kind of learned from a bunch of different people on the tour. I learned from different coaches on the tour and those were people I kind of idolized before and I just kind of soaked up everything I could learn like a sponge, but right before the pandemic happened, I ended up moving to Orlando. This is where the USTA’s main training campus is – they call it the national campus – and this is the first time in my career that I’ve been able to be exposed to, like, high-level coaching so I’ve really just idolized all the different professionals I’ve gotten to work with, to have my own strength and conditioning coach now or my own tennis coach or just a lot of different high-level coaching that’s tailored for me, it was completely new to me and again I’ve just tried to soak everything up like a sponge and I’ve used it to try to see how good I can get and that’s been a huge motivator for me. I’m so thankful that the pandemic actually kind of happened in a way because it’s afforded me more time with these amazing people to learn as much as I could.”