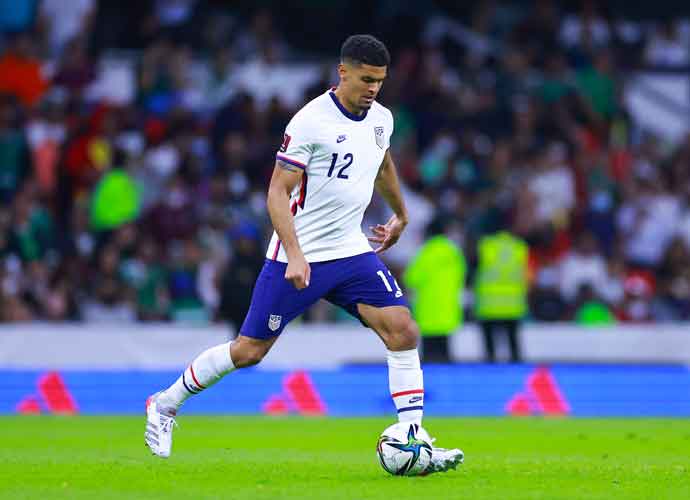 MEXICO CITY, MEXICO - MARCH 24: Miles Robinson of United States drives the ball during the match between Mexico and The United States as part of the Concacaf 2022 FIFA World Cup Qualifiers at Azteca Stadium on March 24, 2022 in Mexico City, Mexico. (Photo by Hector Vivas/Getty Images)

U.S. men’s soccer and Atlanta United player Miles Robinson was arrested in Atlanta Saturday after refusing to pay for a $5 shot at a bar in Atlanta. Robinson claims that he was racially targeted by the staff, who called law enforcement when he took the shot off a server’s tray and refused to settle his bill.

In an incident report from the Cobb County Police Department, Robinson was released on $150 bond following his arrest on one count of misdemeanor theft by taking. He was also given a criminal trespass warning.

After he was apprehended by law enforcement, police told Robinson that the issue could still be resolved if he paid for the shot. Instead of paying, the Atlanta United defender accused them of taking the word of “the racist bartender” and punishing him unnecessarily over $5. He claimed that the incident, which took place at a bar called PBR Atlanta, occurred because he was the only black man present. PBR Atlanta is near Truist Park, the Atlanta Braves’ home stadium.

After the original disagreement between the staff and Robinson, a bartender reported to management, who in turn contacted the police. It was requested of police that Robinson be “criminally trespassed” for taking the shot.

“We are aware of a recent misdemeanor arrest involving Miles Robinson,” the statement said. “We are continuing to gather all information related to the incident and will not have further comment at this time.”

Robinson has not personally commented on the incident. The 25-year-old has been considered a rising star in the American soccer scene and made his first MLS All-Star appearance in 2021. Because of an ACL injury that has kept him out of MLS play all season, it is unlikely that he will appear in the World Cup later this year.