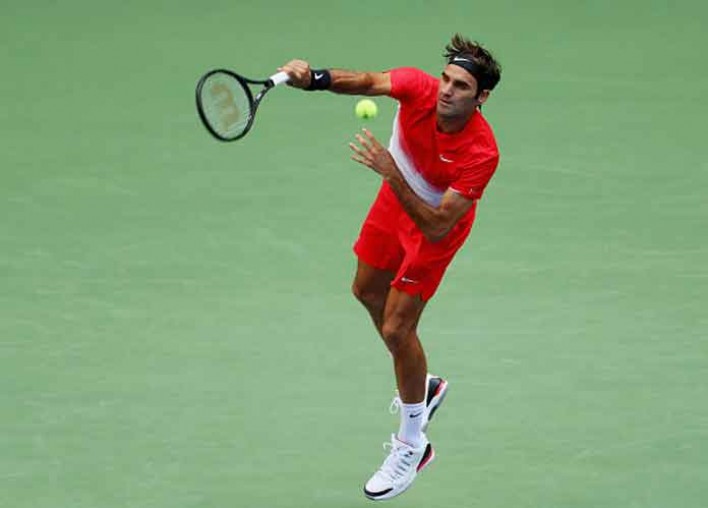 NEW YORK, NY - AUGUST 31: Roger Federer of Switzerland serves against Mikhail Youzhny of Russia during their second round Men's Singles match on Day Four of the 2017 US Open at the USTA Billie Jean King National Tennis Center on August 31, 2017 in the Flushing neighborhood of the Queens borough of New York City. (Photo by Richard Heathcote/Getty Images)

Roger Federer struggled in the first two rounds of the U.S. Open, and on Thursday his battles continued as he fought his way back from a set down to beat Russian veteran Mikhail Youzhny 6-1 6-7 (3-7) 4-6 6-4 6-2 and reach the third round at Arthur Ashe Stadium.

The 36-year-old third-seeded Swiss — who has 19 Grand Slam titles and won five straight U.S. Opens from 2004 to 2008 — extended his record against Mikhail Youzhny to 17-0. Federer made a surprisingly high 68 unforced errors against the Russian.

Federer’s backhand seemed weak like it did in the opening rounds, and there was still the possibility of a back injury — which forced him to withdraw early from the Cincinnati Open — flaring up again.

However, the Swiss did not seem concerned that this would affect his performance in the rest of the tournament in Flushing, Queens.

“I’m pretty confident that I’m only going to get better from here,” said Federer. “That’s a good thing,”

“Because I’ve played a lot, I definitely found some rhythm now.”

He’s undefeated in 2017 when matches go into a fifth set, having won five from five epics this season.

Youzhny — a former top-ten player who reached the U.S. Open semi-finals in 2006 and 2010 — suffered a leg cramp during his loss.

Federer will next face No. 31 seed Feliciano Lopez of Spain on Saturday at 11 am EST. The Swiss is 12-0 against 35-year-old Lopez in his career. The Spaniard reached the third round with a four-set victory over countryman Fernando Verdasco.

On the women’s side, No. 8 Svetlana Kuznetsova joined the list of the top seeds making an early exit, alongside No. 2 Simona Halep, No. 5 Caroline Wozniacki, No. 6 Angelique Kerber and No. 7 Johanna Konta. Kuznetsova fell to Japan’s Kurumi Nara 3-6, 6-3, 3-6.

One of the best players of the day was Shelby Rogers. The 24-year-old American beat Russian-born Australian No. 25 Daria Gavrilova 7-6, 4-6, 7-6 in an exhausting 3 hours and 31 minutes.

Rogers will next play fourth-seeded Ukrainian youngster Elina Sviotlina in the third round on Saturday at 11 am EST.

NEW YORK, NY – AUGUST 31: Roger Federer of Switzerland serves against Mikhail Youzhny of Russia during their second round Men’s Singles match on Day Four of the 2017 US Open at the USTA Billie Jean King National Tennis Center on August 31, 2017 in the Flushing neighborhood of the Queens borough of New York City. (Photo by Richard Heathcote/Getty Images)