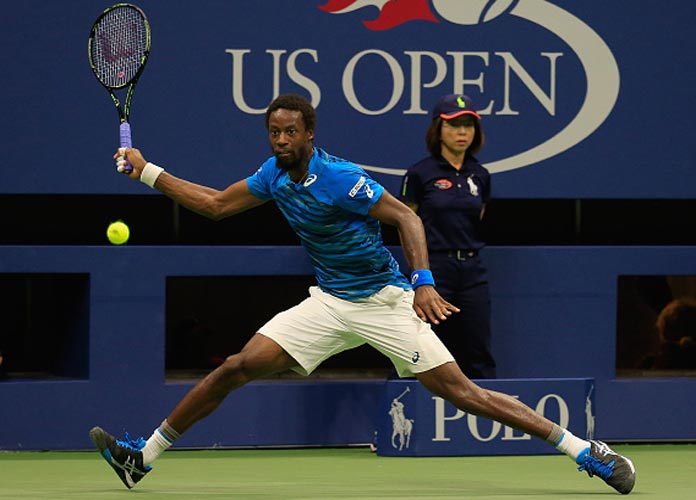 NEW YORK, NY - SEPTEMBER 06: Gael Monfils of France returns a shot against Lucas Pouille of France during their Men's Singles Quarterfinal Match on Day Nine of the 2016 US Open at the USTA Billie Jean King National Tennis Center on September 6, 2016 in the Queens borough of New York City. (Photo by Chris Trotman/Getty Images for USTA)

Monfils, 30, last got to the semifinals at the 2008 French Open, where he fell to Roger Federer.

Pouille had played 19 sets in his previous four matches– just one shy of the theoretical maximum. The 22-year-old looked tired and sluggish in his match against Monfils, during which he was regularly picked off by lobs as he approached the net. Following his victory, Monfils expressed his frustration with the public’s consistent image of him as a showman rather than a serious contender.

“If, today, I drop my racket and I do a slide you will say I will entertain people, no matter what,” said Monfils. “Or if I do a trick shot, and still kill it, you will say I’m a showman. So it is you guys who put me on the spot.

“Today I think I haven’t the chance to do it, but Lucas hit two good tweeners. I don’t think you will tell him he tried to entertain.”

Despite matching and sometimes even surpassing the level of play displayed by Scottish superstar Andy Murray, Monfils has struggled throughout his career to consistently demonstrate he has what it takes to compete at a senior level.

“I am working better,”  he said on Tuesday. “Differently. I don’t always talk about how I do it, but I find a way to take care of my body, you know, take care of everything. So far it’s good.”

Djokovic, who entered the 2016 U.S. Open with a balky left wrist, has now played only five complete sets since his four-set victory over Jerzy Janowicz on Day 1. He will face Monfils in Friday’s semifinal.

On the women’s side, Angelique Kerber also advanced to the semis after seeing off seventh-seeded Italian Roberta Vinci, 7-5, 6-0.

“After I won the first set I was more relaxed at the end,” said the second-seeded German. “I think in the second set what I did good is that I played the first few games really tough so that I was up 3-0 very fast.”

Denmark’s Caroline Wozniacki defeated Latvia’s Anastasija Sevastova 6-0, 6-2 in her own quarterfinal. Wozniacki will face Kerber in the semis.

NEW YORK, NY – SEPTEMBER 06: Gael Monfils of France returns a shot against Lucas Pouille of France during their Men’s Singles Quarterfinal Match on Day Nine of the 2016 US Open at the USTA Billie Jean King National Tennis Center on September 6, 2016 in the Queens borough of New York City. (Photo by Chris Trotman/Getty Images for USTA)