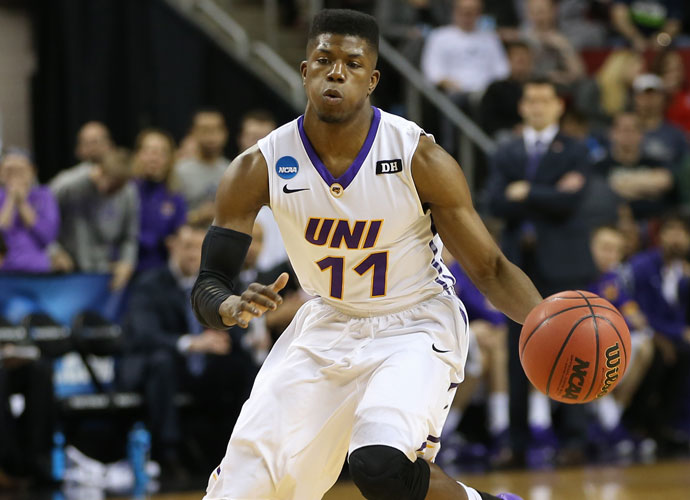 SEATTLE, WA - MARCH 20: Wes Washpun #11 of the UNI Panthers dribbles against the Wyoming Cowboys during the second round of the 2015 Men's NCAA Basketball Tournament at Key Arena on March 20, 2015 in Seattle, Washington. (Photo by Otto Greule Jr/Getty Images)

This kind of stuff usually happens in March. Top teams going down has been a celebrated result of March Madness since the day it tipped off.

But we’ve already seen a number of high-profile upsets so far. George Washington beat #6 ranked Virginia. Georgetown was beaten by Radford at home.

And Saturday, the #1 North Carolina Tar Heels went down, 71-67, to the Northern Iowa Panthers.

At the end of the first half, things seemed like they were going as planned. North Carolina was up by nine at the half, and would have been up 12 but for a fantastic half-court shot by junior Wes Washpun. And in the early going, North Carolina went up by as much as 16 before Northern Iowa stormed back. Washpun was a huge part of the upset, scoring 21 points and racking up eight assists. Jefferson Jackson was a large part of UNC’s offense, scoring 25 points.

For the Tar Heels, it’s an unexpected blow. Roy Williams scheduled this game as a way of having a homecoming for senior star Marcus Paige, who is out with a broken bone in his right hand. But it’s definitely not the end of their season; the consensus #1 team in the country will likely bounce back against future opponents.

Meanwhile, this shakes up the college basketball rankings. The no-brainer effect is Kentucky moving up to #1, due to their double-digit win over Duke. Duke plays Georgetown later today, and that game will play a large role in determining whether the Blue Devils stay in the top five. It’ll be interesting to see where other teams move up to now that UNC has gone down.

For now, let’s just sit back and enjoy the anarchy of college basketball season, where crazy upsets can and will happen at any time.

PHOTO: SEATTLE, WA – MARCH 20: Wes Washpun #11 of the UNI Panthers dribbles against the Wyoming Cowboys during the second round of the 2015 Men’s NCAA Basketball Tournament at Key Arena on March 20, 2015 in Seattle, Washington. (Photo by Otto Greule Jr/Getty Images)