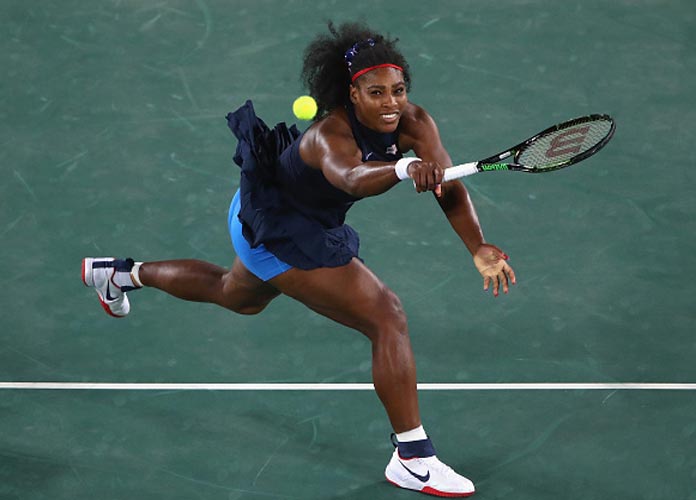 So much so, in fact, that the top-seeded American was ousted from the Olympics after losing 6-4, 6-3 to Ukraine’s Elina Svitolina in the women’s singles Round of 16 in one of the biggest upsets of Day 4.

The 21-year-old Svitolina finished 34-year-old Williams– who committed errors and piled up double-faults at a surprisingly high rate– in a swift 72 minutes.

Williams decided not to attend her post-match news conference, choosing instead to have a statement delivered through a Team USA spokesperson.

“Obviously I’m disappointed,” said Williams, who is also out of the doubles draw after she and her sister, Venus, lost in the first round. “The better player won. It was a great opportunity that didn’t work out the way I wanted it to. At least I was able to make Rio, which was one of my goals. It was awesome, but it’s over now.”

This marks the first time the American powerhouse, who won the singles and doubles gold in London in 2012, will leave the Olympics without a medal.

Just two months ago, Williams defeated Svitolina, the world’s 20th-ranked player, at the French Open. Williams won 6-1, 6-1 on June 1 to advance to the quarterfinals before eventually losing to Spain’s Garbine Muguruza in the finals.

Williams bounced back to win her 22nd career Grand Slam at Wimbledon, thus tying German legend Steffi Graf for most all-time in the Open Era. Nevertheless, she never looked at ease on the hard courts in Rio, even in two earlier singles victories.

It would be difficult to blame the court conditions for 36 unforced errors and five double-faults one game after beating Svitolina to even the second set at 3-3. After Williams hit a second serve into the net, giving away a break, her Ukrainian foe cruised through the last two games to earn the biggest win of her career.

Svitolina admitted she never allowed herself to believe she could actually defeat Williams until match point.

“It was just an unreal feeling, just a relief for me because I didn’t expect even in that moment that I could win,” she said. “And I think it helped me a lot — you don’t expect mistakes from her and just fight and stay focused. Being in the moment, that’s definitely what helped me today, and just relax and go for my shots because I was doing some winners and especially on the second set when it was really, really tight.”

Williams, meanwhile, has struggled with several injuries this season. It remains unclear whether she was suffering from any physical problems in Rio, although she never showed her true form on Tuesday.

Despite Williams’s unexpectedly early exit, there remains an opportunity for gold for another American: 21-year-old Madison Keys, who progressed to the quarterfinals with a three-set victory over Spaniard Carla Suarez Navarro. It’s also a huge chance for Svitolina, who has not had a particularly strong year on the women’s tour but could still win a medal for her country.

“I was just thinking stay in the moment and play the ball, don’t play against Serena Williams, Olympic champion and so many grand slams,” she said. “Just play the ball, and go for it and look for (the) ball. To win a gold medal at the Olympics (would) make it so special, and if I can do it it’s just — unreal.”

RIO DE JANEIRO, BRAZIL – AUGUST 09: Serena Williams of the United States in action against Elina Svitolina of Ukraine during a Women’s Singles Third Round match on Day 4 of the Rio 2016 Olympic Games at the Olympic Tennis Centre on August 9, 2016 in Rio de Janeiro, Brazil. (Photo by Clive Brunskill/Getty Images)