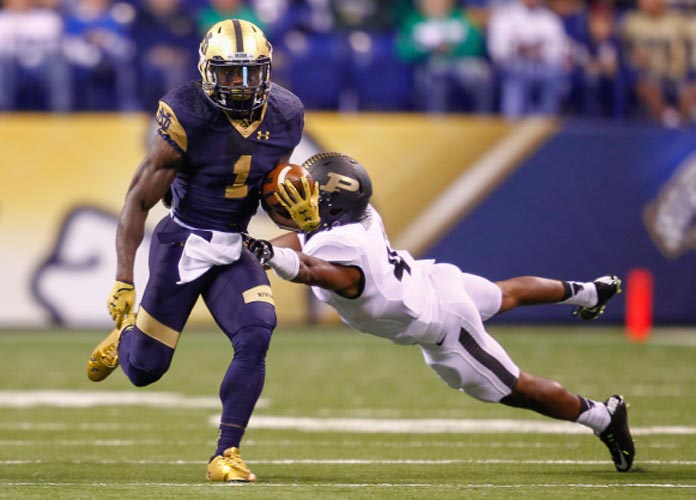 INDIANAPOLIS, IN - SEPTEMBER 13: Greg Bryant #1 of the Notre Dame Fighting Irish runs the ball as Taylor Richards #4 of the Purdue Boilermakers lunges for the tackle at Lucas Oil Stadium on September 13, 2014 in Indianapolis, Indiana. (Photo by Michael Hickey/Getty Images)

University of Alabama-Birmingham (UAB) Blazers running back Gregory Bryant was declared brain dead on Sunday, just one day after he was found shot in a car on Interstate 95 in South Florida.

West Palm Beach Police spokeswoman Lori Colombino said Bryant was declared brain dead at 1 p.m. Sunday. Her statement added that the investigation into the shooting of the 21-year-old UAB recruit is now classified as a homicide.

The shooting occurred before 5 a.m. Saturday and Bryant was transported to a local hospital where he was listed in critical condition. His step-grandfather had told CBS 12 that he heard someone followed Bryant from a club and drove up behind him on the interstate.

Detectives are seeking witnesses of the shooting, Colombino also said. A passenger in the car, 25-year-old Maurice Grover, was hospitalized with minor injuries. As of Saturday night, West Palm Beach Police said they had no other information.

Bryant began his career at Notre Dame and spent last season attending ASA College in North Miami Beach, Florida, (close to his hometown of Delray Beach) where he played in just one game. He was living out of a hotel room in Miami with friends.He was the biggest name in UAB’s first recruiting class since the school restarted its program.

Bryant left Notre Dame after just one season, since he was ruled academically ineligible for the 2015 season. Because UAB won’t play until the 2017 season, Bryant was allowed to enroll in January 2016, instead of possibly having to wait an extra year to be eligible elsewhere. He could become eligible to compete after spending an academic year at UAB. He announced his transfer to UAB in November.

“Coach Clark, he really did me a favor because I was living in hotels in Miami,” Bryant told The Associated Press before national signing day in February. “He said I could come in as soon as the semester was over. Any other school, I would have had to wait another semester and probably be enrolled by December. I just bought into what coach Clark was saying, and I got in with a 2.0 [GPA].”

“We are trying to find answers,” Bryant’s grandmother Annette Kelly told CBS. “Someone is going to have to give us answers because he was just getting ready to go back to college tomorrow. He just came home for the weekend to be with his grandmother and mother, and a coward killed my baby.”

PHOTO: INDIANAPOLIS, IN – SEPTEMBER 13: Greg Bryant #1 of the Notre Dame Fighting Irish runs the ball as Taylor Richards #4 of the Purdue Boilermakers lunges for the tackle at Lucas Oil Stadium on September 13, 2014 in Indianapolis, Indiana. (Photo by Michael Hickey/Getty Images)