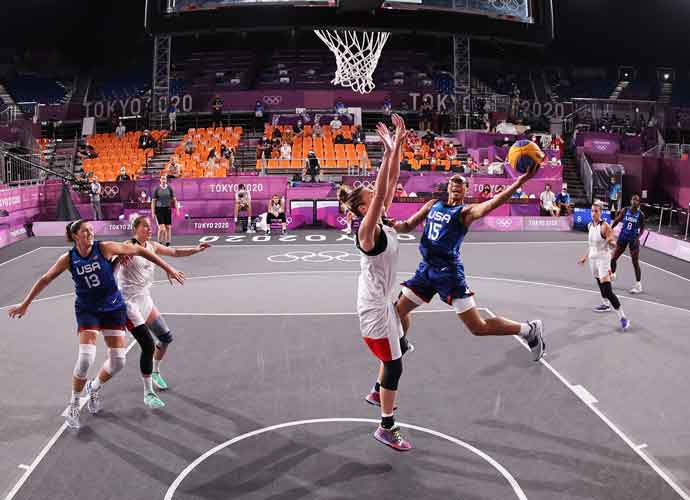 TOKYO, JAPAN - JULY 25: Allisha Gray of Team United States drives to the basket during the Women's Pool Round match between ROC and United States on day two of the Tokyo 2020 Olympic Games at Aomi Urban Sports Park on July 25, 2021 in Tokyo, Japan. (Photo by Christian Petersen/Getty Images)

The U.S. women’s 3-on-3 basketball team has made history in the debut of the event at the Tokyo Olympics.

The women’s team was able to outlast the Russian Olympic Committee. They took an early 7-2 lead and held onto it by playing suffocating defense that frustrated Russia. Russia’s late comeback attempt cut the deficit to three, however, Dolson’s put-back with just over 30 seconds left all but sealed an 18-15 United States victory.

The Americans dominated the five-day tournament, only dropping one of their nine games. Plum, the all-time leading scorer in NCAA history, led the team with 55 points over those nine contests. She scored all five of her points early in the finals to give the U.S. the lead it never relinquished.

All four players are in the midst of successful WNBA careers. Plum and Young are teammates for the Las Vegas Aces, Gray plays for the Dallas Wings and Dolson is a member of the Chicago Sky.

“A gold medal is top tier in my career,” Gray, who won an NCAA national championship in 2017 while playing at South Carolina, said. “I think the only thing that can top this is winning another gold medal. I don’t think any other accomplishment in my career tops this gold medal. The gold medal sits at the very top.”

After their victory, the team made it over to the stands to visit the IOC president Thomas Bach, who was in attendance.