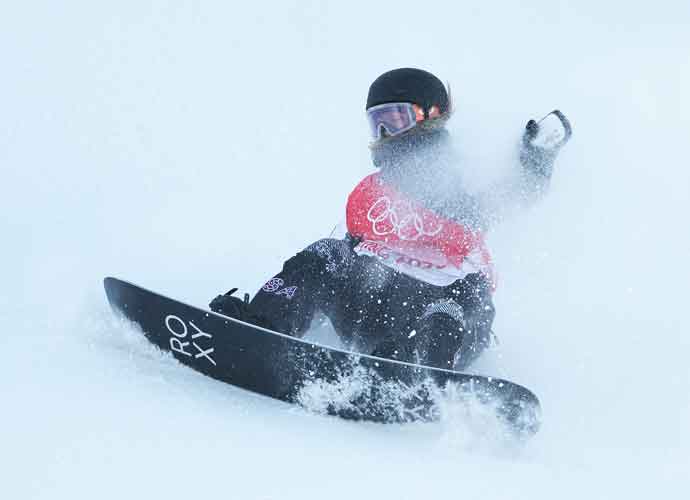 ZHANGJIAKOU, CHINA - FEBRUARY 10: Chloe Kim of Team United States performs a trick in practice ahead of the Women's Snowboard Halfpipe Final on Day 6 of the Beijing 2022 Winter Olympics at Genting Snow Park on February 10, 2022 in Zhangjiakou, China. (Photo by Patrick Smith/Getty Images)

“Oh, my God. I had the worst practice of my life,” cameras caught her saying after her run.

On her second and third runs, Kim tried to go big with a 1260 but fell each time.

“I was dealing with all sorts of emotions, self-doubt,” she said after the event. “But when I was getting ready to drop into my first run, I just reminded myself that it’s a brand-new run.”

“I am in a much better headspace, and I think I have a better idea of what to expect.”

At PyeongChang in 2018, Kim won gold medal in the halfpipe at her first Olympics. It was at those games that she made history by becoming the first woman to land back-to-back 1080s in the halfpipe. She was also the youngest female Olympic gold medalist (17) in snowboarding history.

Following the 2018 games, Kim said she took a break and attended Princeton University, which “gave me a good reset.”

“I feel like I’m in such a better place now mentally and physically, as well.

“Just being so grateful to be out here and represent the U.S. I’m just so honored to be here and just enjoying the moment.”

Read more about:
2022 Beijing Olympics 2022 Winter Olympics Chloe Kim
Listen to the uInterview Podcast!
Get the most-revealing celebrity conversations with the uInterview podcast!