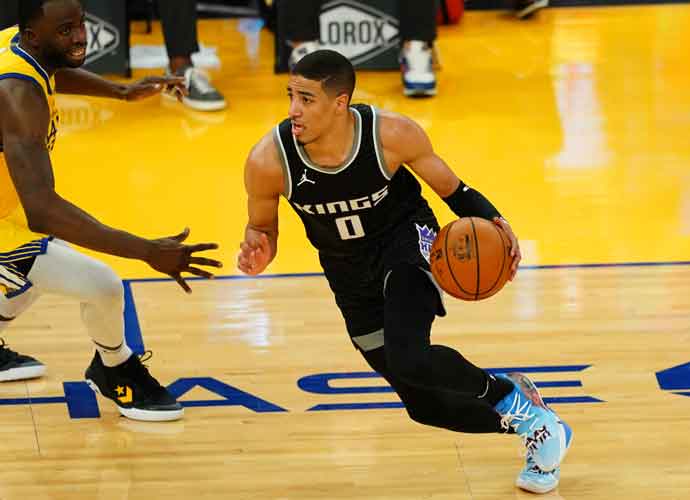 SAN FRANCISCO, CALIFORNIA - APRIL 25: Tyrese Haliburton #0 of the Sacramento Kings handles the ball during the game against the Golden State Warriors at Chase Center on April 25, 2021 in San Francisco, California. NOTE TO USER: User expressly acknowledges and agrees that, by downloading and or using this photograph, User is consenting to the terms and conditions of the Getty Images License Agreement. (Photo by Daniel Shirey/Getty Images)

Star combo guard Tyrese Haliburton, the number 12 overall pick out of Iowa State in the 2020 NBA draft, received promising news yesterday about his left knee injury, via MRI. The Sacramento Kings star has no ligament damage whatsoever, and the franchise can breathe a sigh of relief about the team’s cornerstone.

Haliburton injured his leg during Sunday’s 112-99 win over the Dallas Mavericks, and the team feared the worst. Haliburton was under noticeable distress and needed help getting to the locker room. Coach Luke Walton echoed this sentiment on Sunday. “They’re working on it, so it’s not like we’re trying not to get the information out there,” Walton said. “We’re not hiding anything, but whenever that information all comes in and the powers that be communicate it out, that information will be sent out to you and that will happen when it happens. I can’t give you an exact time.”

Haliburton will sadly be forced to miss the conclusion of this season, but nothing more. In his absence, veteran guard Delon Wright will take his place and De’Aaron Fox should return on Friday as well. Haliburton is also expected to make a full recovery and be ready for the start of next year.

The Kings weren’t close to the playoffs in the loaded Western Conference anyway, so the offseason will simply start early for the young star. In his rookie season, the combo guard averaged  13 points per game, along with 5.3 assists and 1.5 steals. He flashed elite shot-making and playmaking skills, traits that will only improve as he plays more, and gets a better team around him. Interestingly enough for Haliburton, his stats have inflated since teammate Fox was sidelined due to the league’s safety and health protocols. Since Haliburton has become the primary ball handler and distributor for the Kings, he’s averaging 18.5 points and nine assists. This stat line is comparable to players like Chris Paul, Kyle Lowry and Ja Morant, and shows a potential future trajectory for Haliburton.

Although the rookie’s season is over a bit early, Kings fans are surely happy that he escaped without major injury. Haliburton figures to play a huge role in Sacramento’s future.