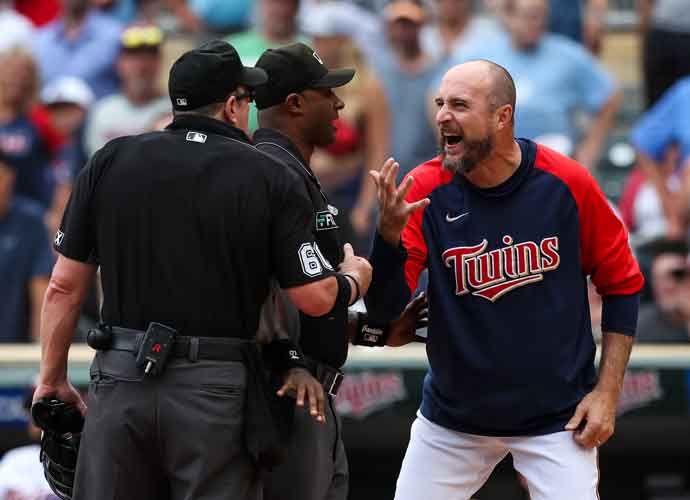 MINNEAPOLIS, MN - AUGUST 07: Rocco Baldelli #5 of the Minnesota Twins argues with umpires Alan Porter #64 and Marty Foster #60 after a coach's challenge determined Whit Merrifield #1 of the Toronto Blue Jays scored a run at home plate against Gary Sanchez #24 of the Minnesota Twins due to Sanchez blocking the plate in the tenth inning of the game at Target Field on August 7, 2022 in Minneapolis, Minnesota. The Blue Jays defeated the Twins 3-2 in ten innings. (Photo by David Berding/Getty Images)

Minnesota Twins manager Rocco Baldelli labeled a call at the plate in the tenth inning of the team’s game against the Toronto Blue Jays as “one of the worst moments” of umpiring he has ever seen. Following the call and Baldelli’s ejection, the Twins failed to score in the bottom of the inning and lost 3-2.

With one out and a man on third base in the top of the tenth, Whit Merrifield attempted to tag up on a fly ball to left field. Catcher Gary Sanchez received the throw in front of the plate, blocking Merrifield’s path to home and tagging him out. Following a review, however, the umpires overturned the call, arguing that Merrifield was not given an opportunity to slide into the plate. The decision gave the Blue Jays a 3-2 lead that would go on to decide the game.

Immediately after the call was overturned, Baldelli stormed out of the dugout and launched into a tirade against the umpires, resulting in a quick ejection. The manager remained emotional after the game speaking to reporters.

“It’s one of the worst moments I think we’ve seen of umpiring in any game I’ve ever been a part of in baseball, and I think it was pathetic what just played out,” Baldelli said.

Sanchez wasn’t as emotional as his coach after the game, but nevertheless argued that he applied a clean tag to Merrifield and that the run should not have counted.

“He slid towards me. I’m just tagging him,” Sanchez said. “I had the ball first. I think the line was open for him to slide to the side. He didn’t. It was a clean play.”

In the midst of a back-and-forth five-game series between the two American League powerhouses, the call helped the Blue Jays even the series at two wins apiece going into the final game Monday. Merrifield, the runner in the game-deciding play, acknowledged that he was familiar with the rules concerning calls at home plate when he saw Sanchez standing in his path.

“Put my head down first couple steps then looked up and tried to figure out how to get into home plate and saw Gary straddling home plate, so tried to just slide into him, straight into him best I could,” Merrifield said. “I know what the rule is; it was just a matter of if they were going to call it.”

With both teams vying for positions in the playoffs, the emotion surrounding the call was likely heightened amid hard-fought division battles. The Twins are first in the AL Central with a 57-51 record, one game ahead of the Cleveland Guardians and two ahead of the Chicago White Sox.

Meanwhile, the Blue Jays’ extra-inning victory brought them within 10 games of the New York Yankees in the AL East for the first time since June. With a 60-48 record, they now have a two-game lead in the Wild Card standings.