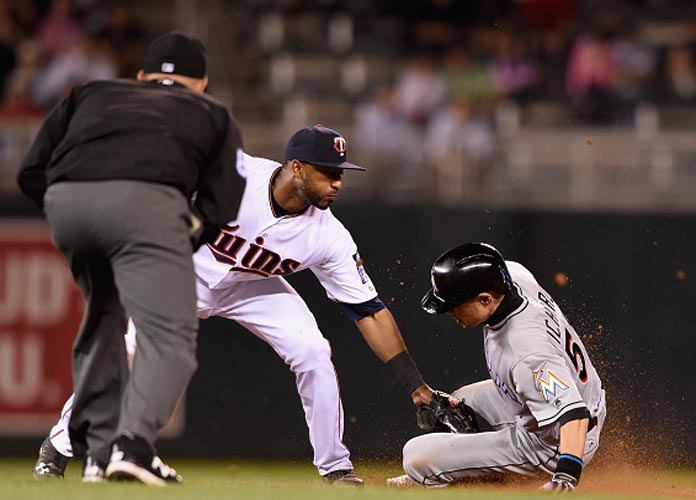 MINNEAPOLIS, MN - JUNE 07: Ichiro Suzuki #51 of the Miami Marlins steals second base against Eduardo Nunez #9 of the Minnesota Twins as umpire Scott Barry #87 looks on during the tenth inning of the game on June 7, 2016 at Target Field in Minneapolis, Minnesota. The Twins defeated the Marlins 6-4 in eleven innings. (Photo by Hannah Foslien/Getty Images)

Eduardo Nunez scored two home runs and Brian Dozier walked off with a two-run homer in the 11th inning to lead the Minnesota Twins to a 6-4 home victory over the Miami Marlins on Tuesday night.

“You always want to be in those situations,” said Dozier. “If you don’t, something’s wrong with you.”

Molitor isn’t completely celebrating just yet, however, as the Twins have lost six of their last eight games and are still fifth in the AL Central at 17-40 this season.

Nunez hit a 443-foot blast into the third deck to lead off the first inning, then followed it up with a 420-foot shot into the bullpen in the fifth.

Dustin McGowan (0-2) walked Joe Mauer and gave up the drive to Dozier to take the loss for the Marlins, who were ahead 4-3 until Robbie Grossman belted a homer off David Phelps into the right field stands in the eighth inning.

“Anytime you have the lead you want to be able to close the door at the end of the game,” Marlins manager Don Mattingly said. “So they sting a little bit.”

Fernando Abad struck out the side for the Twins in the 10th inning, lowering his ERA to .87 in 26 appearances. Boshers (1-0), Minnesota’s eighth pitcher of the game, struck out both Marlins, with a runner on first base, in the 11th.

The Twins bullpen, which began the game with the second-highest opponent batting average (.279) in the majors, logged 6 2/3 scoreless innings with 10 strikeouts and three hits allowed.

“You try not to think about that stuff,” Boshers said. “You’ve just got to go out there and try to execute your pitches, and ultimately the zeroes will come.”

The Marlins scored in all but one of five innings against Twins starter Pat Dean. Ichiro Suzuki led off the game with his 2,967th career hit, a single just out of Dozier’s reach at second, and scored on a Giancarlo Stanton groundout a few moments later.

Marlins shortstop Adeiny Hechavarria tripled in the third inning and scored on another ground ball; three Miami singles followed in the fourth– the last by second baseman Derek Dietrich– all of which produced a third run. A double by Martin Prado in the fifth, followed by Christian Yelich’s RBI single, ended Dean’s night after only 4 1/3 innings, his shortest start yet.

Dean gave up seven hits and four runs in total while striking out two. His ERA increased to 4.75.

Right-hander Ricky Nolasco (2-4, 4.93 ERA) will start for the Twins in the second of their three-game series against the Marlins at Target Field in Minneapolis on Wednesday night. Left-hander Wei-Yin Chin (3-2, 4.25 ERA) will take the mound for the Marlins (30-28, 3rd in NL East).

Twins right-hander Kyle Gibson, whose DL stay for a strained shoulder was delayed last week by a stiff back, has been cleared to start Saturday against the Boston Red Sox. He last pitched on April 22.

PHOTO: MINNEAPOLIS, MN – JUNE 07: Ichiro Suzuki #51 of the Miami Marlins steals second base against Eduardo Nunez #9 of the Minnesota Twins as umpire Scott Barry #87 looks on during the tenth inning of the game on June 7, 2016 at Target Field in Minneapolis, Minnesota. The Twins defeated the Marlins 6-4 in eleven innings. (Photo by Hannah Foslien/Getty Images)