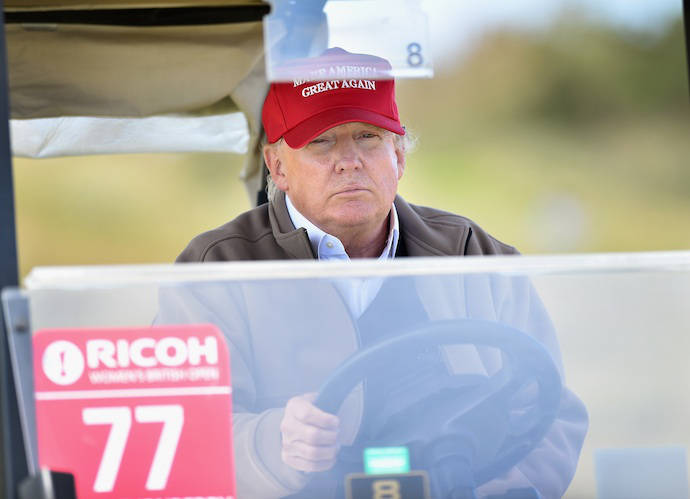 AYR, SCOTLAND - JULY 30: Republican Presidential Candidate Donald Trump drives a golf buggy during his visits to his Scottish golf course Turnberry on July 30, 2015 in Ayr, Scotland. Donald Trump answered questions from the media at a press conference held in his hotel. (Photo: Getty)

Former U.S President Donald Trump criticized the organizers of the British Open 2021 for selecting Royal St. George in Kent as the course to host the major. Trump was unhappy a Scottish course that he owns was not selected.

In an email from his post-presidential account, Trump stated, “As almost all of the great players, sportscasters, and golf aficionados know, the greatest site and course of all for The Open is Turnberry, in Scotland.”

Trump referred to the resort he bought for $63 million as a “truly magical place.”

Royal St. George has received criticism from some competitors for the nature of its bumpy course and unusual sightlines.

Brooks Koepka made a statement earlier in the week. “It’s not my favorite venue that we’ve played,” he said. “Whether it be a couple shots to nothing, a couple blind tee shots or shots in where you can’t really see much. I’m not too big of a fan of that.’’

The ex-putter-in-chief explained the reasoning behind the course selection. “This course was not chosen for The Open because they consider a wonderful person, and many-time Club Champion, named Donald J. Trump, to be too controversial.”

Trump responded to this explanation. “Remember, though, controversy only makes things ‘hotter.'”