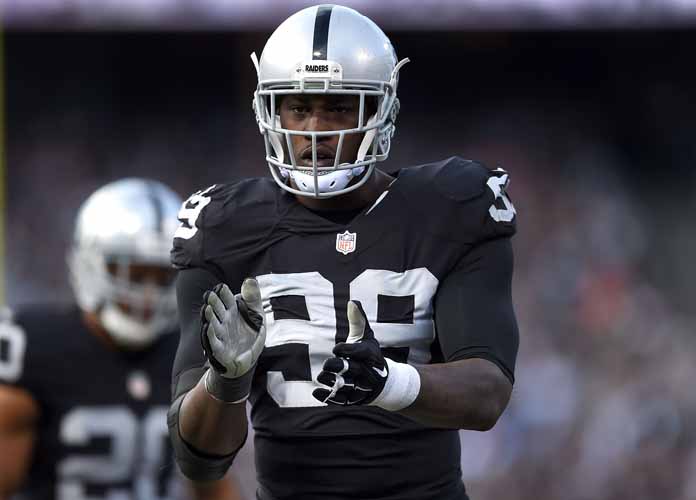 In a move expected by many, Oakland Raiders outside linebacker Aldon Smith has checked into a treatment facility in California, according to a report by TMZ Sports.

The video in question shows a man smoking a blunt while talking to a female and asking her if she will join him in the “fire up session.”

Smith denied being in the video, despite the man using his name and other videos featuring Smith having appeared on the social media site from the same user.

Good try, not me

But the video evidence appears to be pretty incriminating.

It begins with a man panning the camera on his phone toward a woman who covers the lens, “I’m not f—— with you,” the woman says.

The man, possibly Smith, attempts to calm her down by explaining that the video will not likely be seen by many, if any.

It was this thought process that allows the man to lower his guard and possibly reveal his true identity, despite continued protests from his female cohort.

“N—- you shouldn’t even be posting this,” the woman tells the man.

After coughing a couple times to clear his lungs of the smoke, the man tries to reason with her.

At that moment the man seems to have done a masterful job of concealing his identity … and then he steps in it.

“You’re stupid, you’re tripping,” he tells the woman. “They don’t know its me. It’s not like I put ‘Aldon Smith.'”

Smith was suspended one year by the NFL back in November after repeated violations of the league’s substance abuse policy.

Off-field incidents have plagued Smith since he entered the NFL in since being selected by the San Francisco 49ers with the 7th overall pick in the 2011 NFL Draft.

In April 2013, Smith was arrested at Los Angeles International Airport as a result of an incident with a TSA agent where Smith became “belligerent and uncooperative,” according to Lorenzo Reyes of USAToday.  Reyes also reported that the TSA agent alleged Smith claimed he had a bomb.

All charges were dropped in that case.

When on the field, Smith has been a very productive defender.

In 59 career games, Smith has posted 47.5 sacks, five forced fumbles and one INT.

The step to enter rehab is either a shrewd move by Smith’s PR team to control the story and the narrative of his career or a necessary step for his mental health and safety.

Those close to Aldon Smith are very happy that he made this move. At this point, it’s more about his well being than football. #Raiders

“Those close to Aldon Smith are happy he made this move,” Williamson Tweeted Friday. “At this point, it’s more about his well being than football.”