Trail Blazers One Game Away From Eliminating Clippers With 108-98 Game 5 Win - uSports.org 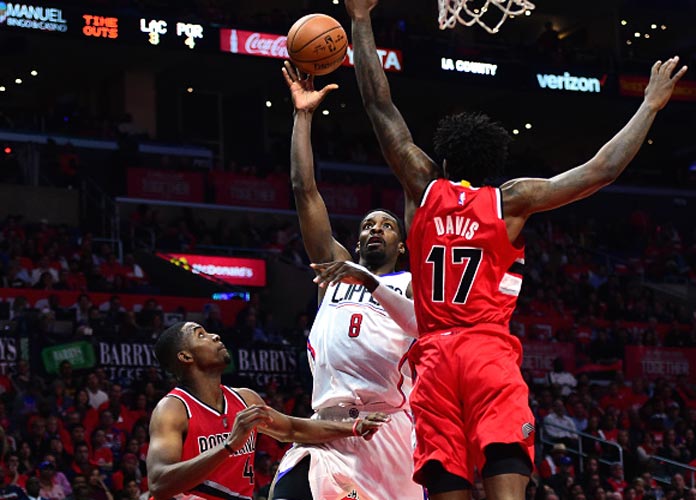 LOS ANGELES, CA - APRIL 27: Jeff Green #8 of the Los Angeles Clippers attempts a shot between Maurice Harkless #4 and Ed Davis #17 of the Portland Trail Blazers in a 108-98 Trail Blazer win during Game Five of the Western Conference Quarterfinals during the 2016 NBA Playoffs on April 27, 2016 in Los Angeles, California.

After a very sluggish first half, the Portland Trail Blazers rallied to surge to a 108-98 road victory over the Los Angeles Clippers in Game 5 on Wednesday night, thus earning a 3-2 lead in the series.

The Clippers were missing All-Stars Chris Paul and Blake Griffin, who are nursing a broken right hand and an aggravate left quad respectively following Monday’s Game 4. And yet, Portland still struggled to put up shots against the Clippers’ aggressive defense. Maurice Harkless scored 14 points but other than that, the Blazers were atrocious, trailing 50-45 at the half after 52 possessions. During the half, Damian Lillard missed all five of his attempts from the field and ended with only three points.

“I just had to be patient,” Lillard said. “It wasn’t even so much missing the shots that were bothering me, it was just I couldn’t get any attempts because they were so aggressive.”

Fortunes turned for Portland in the second half, as they finished with an explosive 37-point fourth quarter.

The turning point came during a two-minute run halfway through the period during which the Blazers scored 11 points in just four possessions. The sequence began with a series of prolific off-ball screens: first, a flare screen by Mason Plumlee for Allen Crabbe along the weak-side arc, while Harkless pinned C.J. McCollum‘s man on the near side. Lillard then hit McCollum with a screen pass, but immediately afterwards became the cutter, and McCollum returned the favor with his own pass to Lillard, who then stopped, popped and scored.

McCollum and Lillard cut off more flare screens than any other players in the league this season.

“It’s a tough balance, because you don’t get as much penetration when you’re running flare screens and things like that,” Blazers head coach Terry Stotts said. “So I try to balance between running pick-and-rolls to create a problem versus off-ball screens.

On the final possession of the run, Lillard took a high screen pass from Plumlee, which he rejected to move left. Although Austin Rivers guarded him well, Lillard was able to seamlessly sink a 25-foot shot.

LOS ANGELES, CA – APRIL 27: Jeff Green #8 of the Los Angeles Clippers attempts a shot between Maurice Harkless #4 and Ed Davis #17 of the Portland Trail Blazers in a 108-98 Trail Blazer win during Game Five of the Western Conference Quarterfinals during the 2016 NBA Playoffs on April 27, 2016 in Los Angeles, California.