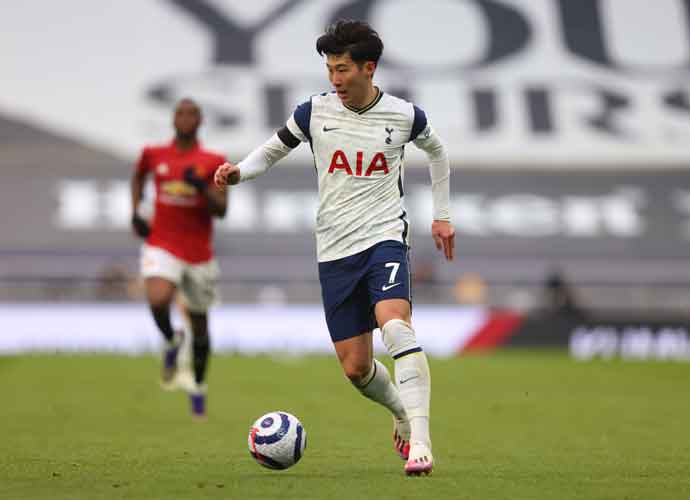 LONDON, ENGLAND - APRIL 11: Son Heung-min of Tottenham Hotspur during the Premier League match between Tottenham Hotspur and Manchester United at Tottenham Hotspur Stadium on April 11, 2021 in London, United Kingdom. Sporting stadiums around the UK remain under strict restrictions due to the Coronavirus Pandemic as Government social distancing laws prohibit fans inside venues resulting in games being played behind closed doors. (Photo by Marc Atkins/Getty Images)

Son Heung Min was subjected to racist messages on Twitter and Instagram. As a result, Tottenham released a statement on the matter.

The statement read, “Another matchday and more abhorrent racial abuse suffered by one of our players”.

Additionally, the club vowed to take action. “This has again been reported to the platforms and we shall now undertake a full review alongside the Premier League to determine the most effective action moving forward,” read Tottenham’s statement.

In the meantime, Arsenal legend Thierry Henry announced he would quit social media. Henry told CNN Sport that social media is “not a safe place”.

Both Twitter and Facebook condemned the racist abuse on their platforms. A Facebook spokesperson claimed, “We do not want it on Instagram and we have removed a number of comments and accounts that broke our rules.”

Facebook vowed to take action and claimed, “We share the goal of tackling online abuse and holding people who share it accountable. We do this by taking action on content and accounts that break our rules and cooperating with law enforcement when we receive a valid legal request.”