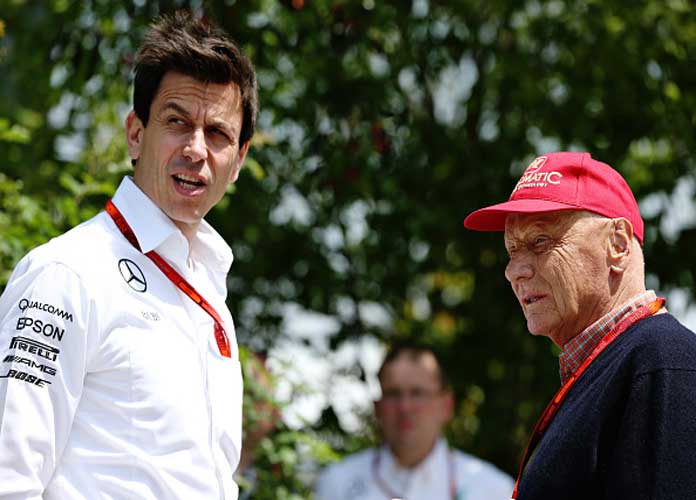 Mercedes Formula 1 executive director Toto Wolff and non-executive chairman Niki Lauda have signed new deals to remain with the team through the end of 2020.

Their new contracts coincide with the duration of Mercedes’ own current commercial arrangement with F1.

Wolff retains his 30 percent shareholding in the team and fellow Austrian Lauda, a three-time world champion, keeps his 10 percent stake.

“The last few years have been some of the most enjoyable I have had in Formula One,” said Lauda. “Toto and I formed a perfect partnership at Mercedes and we have a great team on every level that has delivered results. I must thank Dieter [Zetsche, chairman and CEO of Daimler AG – the team’s majority shareholder] and the other members of the board of Daimler for renewing their confidence in us.”

Wolff joined Mercedes from Williams in February 2013, while Lauda, who will be 68 on Wednesday, has held his current position since late 2012.

Furthermore, Mercedes’ technical executive director Paddy Lowe is set to leave the company to join Williams in the next few weeks.

Lowe has been replaced by James Allison, who previously served as Ferrari’s technical director.

Dieter Zetsche, the chairman and CEO of Mercedes’ parent company Daimler, stated: “In 2013, we restructured the management of the team with the clear goal of improving our performance.

“Since then, however, the results have exceeded our expectations. A key factor in this success has been the combination of Toto’s entrepreneurial skills and Niki’s experience. Their renewed commitment gives our programme important continuity for the next four years.”

Mercedes has a brand-new F1 car that will be unveiled to the public on Thursday, before the start of pre-season testing three days later.

The first 2017 car to be unveiled will be that of Swiss team Sauber on Monday, followed by the Renault on Tuesday, Force India on Wednesday and finally Ferrari, McLaren and Williams on Friday.

Formula One Ends Use Of ‘Grid Girls’ At Grand Prix Races, Women Respond