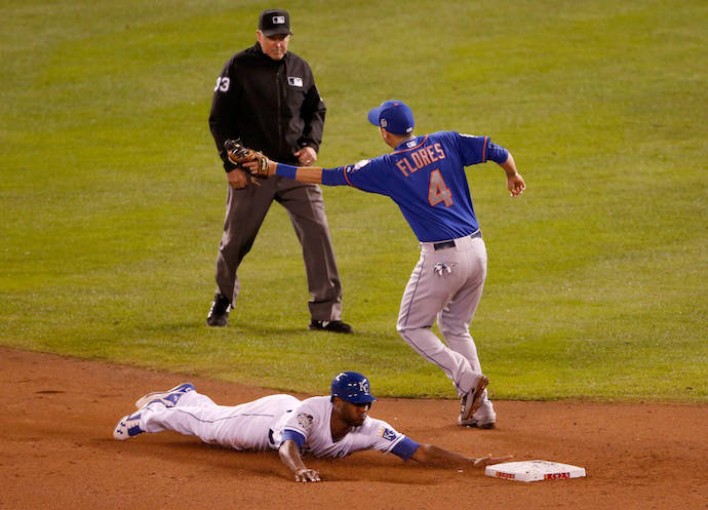 KANSAS CITY, MO - OCTOBER 27: Lorenzo Cain #6 of the Kansas City Royals steals second base before Wilmer Flores #4 of the New York Mets can apply the tag in the sixth inning of Game One of the 2015 World Series at Kauffman Stadium on October 27, 2015 in Kansas City, Missouri. (Photo by Christian Petersen/Getty Images)

While the Oakland Athletics and the Seattle Mariners kicked off the season a little early, the rest of the MLB had to wait until March 28 to play meaningful baseball. Fans who found themselves feining for the sport weren’t disappointed when it returned.

The Los Angeles Dodgers hit an opening day record eight home runs as a team. Joc Pederson hit the first Dodger dinger in the second inning. Enrique Hernandez, Austin Barnes, and Corey Seager all went deep in the fourth. That led to a 12-5 victory over the Arizona Diamondbacks. The Dodgers are on pace for 1,296 homers. It would shatter the current team season record of 267.

The Milwaukee Brewers were snatched from the jaws of defeat by centerfielder Lorenzo Cain. With two outs in the ninth inning, Cardinal Jose Martinez sent a shot deep. Cain took off and found himself at the warning track. He reached up, snagged the would be home run, bounced off the wall, screamed, and threw the ball into the stands. The Brewers won 5-4.

Bryce Harper also made his Philadelphia Phillies debut. He trotted out to right field, took a bow for the fans and fist pumped. Later on, he showed off his green, Phanatic-inspired cleats when he dug in. Though he went hitless, the Phillies still won and it showed a promising era was beginning.

And another newly-acquired player made a splash as well. In his first game as a New York Met, Robinson Cano made sure his team won on opening day. He took the third pitch he saw deep. The Mets are now 38-12 in their last 50 opening days, a team-best in all four of the major sports.

That’s the best record in the 4 major sports for opening games in the last 50 years. pic.twitter.com/LBl8rgDqr7

As each MLB team looks to hoist the World Series trophy in November, be sure to follow along. Opening day brought plenty of suprises.