Top 5 MLB Games to Watch This Weekend - Where & When to Watch [PREDICTIONS] - uSports.org 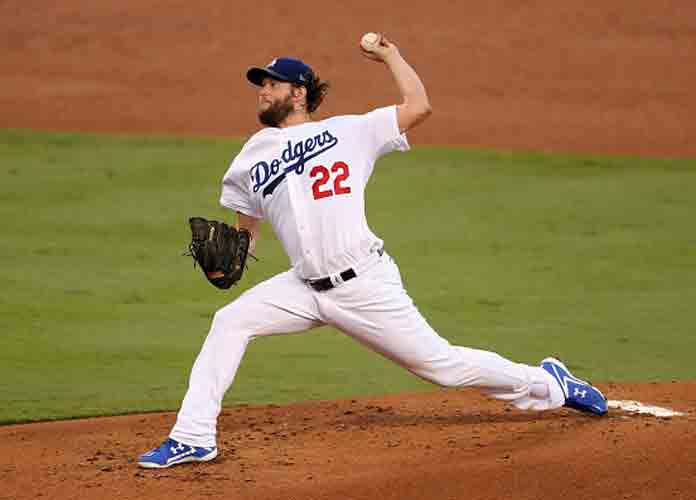 LOS ANGELES, CA - OCTOBER 24: Clayton Kershaw #22 of the Los Angeles Dodgers pitches during the third inning against the Houston Astros in game one of the 2017 World Series at Dodger Stadium on October 24, 2017 in Los Angeles, California. (Photo: Getty)

With July coming to a close and the non-waiver trade deadline looming just around the corner, teams are doing their best to make whatever moves they can in order to improve their rosters in one way or another. Some franchises are in win now mode, while others are planning for the future, and only time will tell how every swap works out. In the meantime, however, we still have plenty of baseball to come as we make our way closer and closer to the postseason. Here are five of the best MLB games to close out your July the right way.

After a rough start to the season, the Dodgers are back on top of the NL West and they only seem to climbing higher and higher. After a couple of stints on the disabled list, Clayton Kershaw is back to his old self again, posting a fantastic 2.19 ERA over his four starts in July so far. LA is clearly going all in this season despite losing star shortstop Corey Seager for the season in April, as proven by their aggressive trade for shortstop Manny Machado from the Baltimore Orioles. Machado is in the midst of his best offensive season in the Majors and has been fantastic with LA so far. On the other side, the Braves are no longer a surprise and have instead firmly established themselves as a serious threat in the National League. First baseman Freddie Freeman continues to have an excellent season and Mike Foltynewicz has just made his first All-Star Game, so we have the ever exciting matchup which sees two good offenses go against two great pitchers.

The A’s are one of those teams that quietly sneak up toward the Wild Card without anybody noticing up until they’re right there. They don’t really have any superstar players or big time storylines, but they’re somehow getting it done in the AL West, which is arguably the best division in baseball right now. With their division being so tough, though, they can’t help but hover around the middle in the standings despite playing so well. The Rockies are essentially in the same situation, as they’re third in their division but are still right in the Wild Card hunt. However, with the likes of third baseman Nolan Arenado and centerfielder Charlie Blackmon, Colorado has that star power which always makes their games fun to check out.

A pair of NL squads in divisions which are basically both four-team races at this point, every win counts for the Brewers and the Giants, and they’re both sending their aces to the hill in this one. Milwaukee is one of the best teams in baseball in terms of ERA, which is supported by solid starting pitching and a fantastic bullpen. I’ve said it before and I’ll say it again: Josh Hader is the next big thing to come out of the bullpen and he’s a blast to watch day in and day out. Although Madison Bumgarner is one of the best starters in baseball as a whole, he’s had a rough July by his standards, as he’s posted a 4.22 ERA over four starts. In contrast, he posted an ERA of 2.51 in June. If the Giants want to move up in the standings, Bumgarner is going to need to look more like he did last month.

Sticking with the NL Central, this matchup sees a powerhouse offense go up against one of the best feel-good stories of the season. First baseman Anthony Rizzo and third baseman Kris Bryant have both been about as good as expected this season for the Cubs, but it’s second baseman Javier Baez who is having the best season of anyone on the team. Baez made his first all-star appearance earlier this month, and at 25-years-old, we’ve still got plenty to see from him. For the Cardinals, you can’t not love Miles Mikolas. After having a very limited career with the Padres and Rangers from 2012 to 2014, Mikolas took his game overseas to Japan. After returning to the States and being picked up by the Cards, the 29-year-old Mikolas has shown us that late bloomers can come from anywhere. After it seemed as though his Major League career might be done, he’s been good enough to insert himself firmly into the NL Cy Young conversation. Like I said, you can’t help but feel great for him.

Seattle might not be as neck-and-neck with Houston in the AL West as they were a few weeks ago, but they’re still a favorite to snag a Wild Card spot along with (most likely) either the Red Sox or the Yankees. Still, they’re a bit of an anomaly, since they’re not really above average in either hitting or pitching. Normally succeeding record-wise but not statistically doesn’t really last, but the Mariners are making it so, and it’s a little tough to explain why. Still, they look to be keeping themselves up as the go to LA to take on Mike Trout and company. While Trout has slowed down a bit since his ridiculous first couple months of the season (which isn’t saying much considering how amazing he was), he’s still one of the favorites for AL MVP alongside Indians third baseman José Ramírez. Trout is the best and most exciting player in baseball and is a blast to watch no matter what the matchup is, but it’s even more the case when going up against a good team.