Top 10 NFL Draft Picks: Who Will Have the Biggest Immediate Impact in Their Rookie Season? - uSports.org 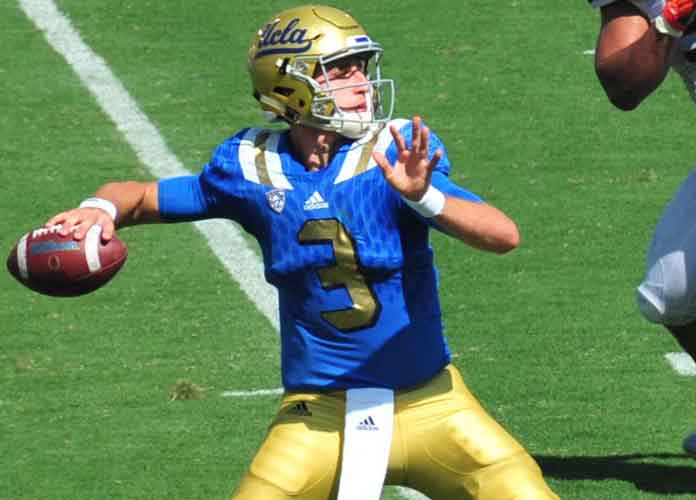 Top 10 NFL Draft Picks: Who Will Have the Biggest Immediate Impact in Their Rookie Season?

The 2018 NFL Draft class looks to be one of the best we’ve had in years, with a bevy of players believed to be future stars going in the first couple of rounds, with the top 10, of course, being of the most interest. Not only was this a star-studded first ten picks, but it was also the first time four quarterbacks were all selected within the first ten picks of the NFL draft, all of whom have high expectations going into their NFL careers. Quarterback is the most important position in football, so it makes sense for us to wonder about which of them will have the most success, but there are plenty of other players from the top 10 who could have just as big an immediate impact, if not even better. That being the case, let’s rank each of those first ten picks in terms of how much of an impact they can have right off the bat to start their NFL careers as rookies.

Mike McGlinchey is a monster of a human being, standing at a massive 6’8″ and weighing in at 309 pounds, and was considered by many experts to be the best offensive tackle in this draft. Apparently San Fran agreed, opting to take him with the 9th pick in the draft. After all, they need as many ridiculously huge people as possible to protect quarterback and $137.5 million man Jimmy Garoppolo, right? McGlinchey has all the tools necessary to be a great NFL tackle, but he starts his career off facing some of the NFL’s elite defensive lines early on, highlighted by a Week 4 matchup with the Chargers and Joey Bosa, as well as the 49ers’ pair of games against the Rams’ dual-threat of Aaron Donald and Ndamukong Suh. I still think McGlinchey will have a nice NFL career, but he starts it off with some really rough competition.

The Browns taking Baker Mayfield first overall was just as surprising as it was unsurprising. For one, Mayfield was considered by most experts to not be the top quarterback on the board given the risk attitude and style of play brings to the table. On the other hand, this is the Cleveland Browns and they rarely do anything that anybody else thinks makes sense. Mayfield has a ton of upside, but a lot of his college game will be tough to translate into the NFL. His throwing accuracy is excellent, which is a huge plus, but he’s not going to be able to run in the NFL like he could in college, and his off-the-field issues and general cockiness are not going to go over well with pro teammates, coaches, and opponents if he doesn’t change that part of his personality. But setting all the aside, the Browns brought in Tyrod Taylor during the offseason, who is a legit NFL starter, not just a placeholder for a rookie to eventually take over. Mayfield is the Browns’ quarterback of the future (for now), but it’ll take time for him to take over for Taylor.

2017 Butkus Award winner Roquan Smith is a fantastic addition to the Bears’ already pretty solid defense. An inside linebacker with huge stopping power and athleticism, Chicago is hoping they’ve found the next Brian Urlacher. While it’s always way off base to compare a rookie to a Hall of Famer, Smith has all the makings of a star in the NFL. However, he does have some tough matchups to start out his career, facing a renewed Aaron Rodgers-led Packers team in Week 1, followed by matchups later on with star running backs David Johnson, LeSean McCoy, and Todd Gurley (along with seeing Dalvin Cook twice and (probably) Saquon Barkley once). It’ll be those games against elite running backs which will be most telling as to how quickly smith can adapt to the NFL, so Bears fans should pay close attention.

Another surprise pick by the Browns considering Bradley Chubb was the top ranked defensive player on most teams’ draft boards, Cleveland still got a really great player in cornerback Denzel Ward out of Ohio State. Ward’s stock rose considerably between the end of the college football season and the conclusion of the NFL Combine, where he shined during his workouts and shot up draft boards everywhere. He’s wildly athletic and can hit like a truck for someone not of tremendous physical size, and he’s set to become one of the best cornerbacks in the NFL within the coming years. Couple him with defensive end and 2017 first overall pick Myles Garrett and you’ve got a Browns team with one of the better up-and-coming defenses in the NFL.

Darnold was considered by many to be the best quarterback in the draft, so when he fell to the third pick, the Jets had no choice but to snag him. Darnold has all the intangibles needed to be a successful NFL quarterback: great arm strength, accuracy, mobility, and an ability to extend plays farther than most. He still has to work on his ball security and decision making, but Darnold has everything a team could want out of their quarterback of the future. He’ll be starting off below Josh McCown and Teddy Bridgewater on the Jets’ depth chart at the beginning of the season considering that Darnold will only be 21 by the start of the NFL season, as well as the fact that McCown is the ideal mentor for a young QB, but don’t be surprised to see him on the field sooner rather than later.

Josh Allen has a cannon of an arm and a fantastic ability to move outside of the pocket, which is why the Bills traded up to snag him with the 7th pick. With Tyrod Taylor off the Cleveland, Buffalo is left with Nathan Peterman (who threw five interceptions in the opening half of his first of two NFL starts) and AJ McCarron, a career backup in Cincinncati, at the quarterback position. Of those three options, Allen definitely has the most upside, but he’s also very, very raw. He showed some poor decision making while at Wyoming while also failing to read defenses at certain times, so he needs time to adjust to the NFL. However, with such poor options at quarterback, we could see Buffalo insert Allen into their games really quickly.

Andrew Luck is clearly the Colts’ guy moving forward, considering the fact that he’s one of the NFL’s elite quarterbacks…when he’s on the field. Luck takes a crazy amount of hits for a quarterback, and it shows in his health, as a shoulder injury has been adversely affecting him over the past couple of seasons, eventually forcing him to miss all of 2017. So how can the Colts prevent that from happening in the future? By drafting the best offensive lineman in the draft. Nelson brings a huge upgrade to the Indy’s lackluster offensive line and should provide Luck with the protection he so desperately needs for years to come. Nelson’s play in his last year at Notre Dame proved that he’s NFL ready, and that he should make an impact right away.

After slipping all the way to the 10th pick, Josh Rosen was bitter, claiming that every team who passed on him had made a mistake. While that remains to be seen, Rosen could very well start making his point as soon as the season begins. Of all the incoming quarterbacks this season, he is definitely the most NFL-ready and could move to the top of their depth chart very, very soon. The only person he really has to beat out is Sam Bradford, who, despite being given a stupidly lucrative contract by Arizona, is seemingly always getting hurt in one way or another. If Rosen gets starts early on, he’ll have stars in running back David Johnson and wide receiver Larry Fitzgerald to help him out, so I don’t see anything holding him back from having success right out of the gate.

Bradley Chubb was almost universally considered the best defensive player in this draft, so the Broncos getting him 5th overall almost seems like a steal. Chubb has elite pass rushing abilities and it set to obliterate opposing offensive lines and quarterbacks as soon as he steps onto an NFL field. He and star linebacker Von Miller are set to become one of the best pass rushing duos in football, and they should both benefit greatly from the other’s presence. Denver’s defense took a big step backward last year after being one of the NFL’s best, and it seems like Chubb will be instrumental in getting them back to that level.

Simply put, Saquon Barkley is the best player in this draft class. He has all the speed, agility, elusiveness, strength, and pass-catching abilities needed in a modern NFL running back and is set to become the Giants’ workhorse back from opening day on. New York quarterback Eli Manning was absolutely terrible last season, and at 37-years-old, it’s tough to say how much he has left in the tank. The Giants want Barkley to be able to take some of the pressure off of Eli, as well as to compliment star wide receiver Odell Beckham Jr and emerging tight end Evan Engram, so it seems pretty safe to say that Barkley will be used very, very heavily as soon as the season starts. He has the talent to really become special in this league and looks like the most exciting rookie to watch in the NFL this coming season.

Deebo Samuel “Dug In” On Not Playing For 49ers