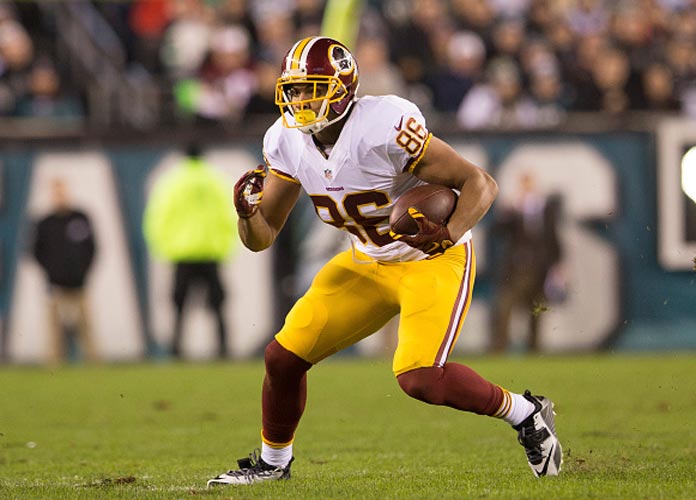 PHILADELPHIA, PA - DECEMBER 26: Jordan Reed #86 of the Washington Redskins runs with the ball after a catch against the Philadelphia Eagles on December 26, 2015 at Lincoln Financial Field in Philadelphia, Pennsylvania. (Photo by Mitchell Leff/Getty Images)

After seven injury-riddled seasons with the Washington Football Team, tight end Jordan Reed is retiring from the NFL, according to an ESPN source.

The 30-year-old skills player completed six seasons with Washington before spending last season with the San Francisco 49ers. In 10 games last season, the tight end hauled in 26 passes. On his career, Reed tallied 355 receptions and 28 touchdowns.

Reed was integral to Washington’s 2015 success when the team won the NFC East. The 6-foot-2, 242-pound pass catcher hauled in 87 receptions for 952 and 11 scores that season. When he was healthy, Reed was one of the most talented tight ends in the league. The combination of size, speed and agility allowed him to create mismatches against linebackers and safeties attempting to cover the one-time Pro Bowler. Reed was almost unstoppable in one-on-one situations.

Unfortunately, Reed always seemed to be dealing with an assortment of injuries and ailments. He never participated in 14 games in a season and played in fewer than 10 games three times over his career.

One reason Reed could be hanging up his cleats is due to concerns about a potential brain injury. The bulldozing tight end suffered at least seven documented concussions throughout his professional career. He also dealt with some pretty serious non-contact injuries, particularly in his knees and feet.

In 2019, Reed seemed to be on the mend from his latest ailment and had a very impressive training camp according to all sources close to Washington’s team. Reed had said that he felt he was back to his old self, and several players and coaches vouched that the tight end was about to have a comeback season.

Unfortunately for Washington’s former playmaker, in the third preseason game, Falcons safety Keanu Neal knocked the living daylights out of Reed. While trying to complete the catch, Reed went down with his most serious concussion. Although Neal was fined for the hit, Reed never played in a game during his final season with Washington.

Like a few other tight ends in the league, Reed entered college as a quarterback at the University of Florida. The coaching staff made the bright move to move the big man to tight end after one season. He performed well enough in college to be drafted in the third round of the 2013 NFL Draft.