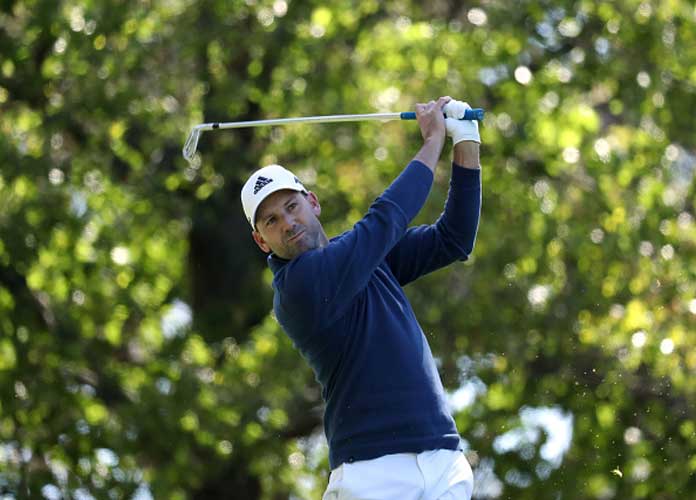 AUGUSTA, GA - APRIL 07: Sergio Garcia of Spain plays his shot from the fourth tee during the second round of the 2017 Masters Tournament at Augusta National Golf Club on April 7, 2017 in Augusta, Georgia. (Photo by Rob Carr/Getty Images)

Text messages between golfer Sergio Garcia and LIV Golf CEO Greg Norman were released  as part of the lawsuit filed by LIV golfers in response to the ban on LIV golfers from competing in PGA Tour events and majors.

In the messages, dating back to February, Garcia explains to Norman the PGA tour’s plan to eventually ban golfers. Garcia had initiated a conversation on February 11 saying, “I just wanted to see how things are going with the League, cause it seems like a lot of those guys that were loving it and excited about it last week, now are shi–ing in their pants.”

Norman replied saying, “Who are you referencing so I can run a check?”

When Garcia responded with the news that the PGA Tour told golfers that they’d be banned for life should they join LIV Golf, Norman explained that it was an empty threat.

“They cannot ban you for one day let alone life,” Norman replied. “It is a shallow threat. Ask them to put it in writing to you or any player. I bet they don’t. Happy for anyone to speak with our legal team to better understand they have no chance of enforcing.”

These texts exchanged in February came just months before the PGA Tour issued an indefinite suspension on LIV golfers in June.

This ban prompted a lawsuit from Phil Mickelson, Bryson Dechambeau and nine other golfers to file an intrust lawsuit against the PGA Tour, questioning the league’s authority to enact and enforce such a ban.

“Happy to have anyone speak to our legal team to better understand they have no chance of enforcing”#LIVGolf pic.twitter.com/JSaQkdLX5s

This also comes less than a month after the Department of Justice announced an investigation into the PGA Tour to see if they engaged in “anticompetitive behavior” with LIV Golf.