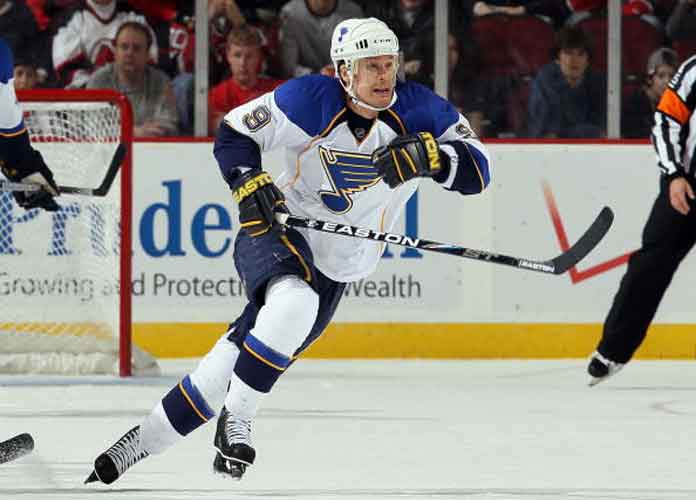 NEWARK, NJ - MARCH 20: Paul Kariya #9 of the St. Louis Blues skates against the New Jersey Devils at the Prudential Center on March 20, 2010 in Newark, New Jersey. The Blues defeated the Devils 1-0.

Paul Kariya and Teemu Selanne are among the headliners of the 2017 Hockey Hall of Fame Class, which was announced Monday.

Goyette is also an eight-time world champion who scored 113 goals and 105 assists in 171 games for Canada. Jacobs, 77, has been the Bruins’ owner since 1975. Boston has reached the Stanley Cup Finals six times since then and captured one national title in 2011.

Kariya was a five-time All-Star and two-time Lady Byng Trophy winner who compiled 402 goals and 587 assists in his career, which also includes stints with the Colorado Avalanche, Nashville Predators and St. Louis Blues.

Selanne was a four-time All-Star who captured the 1992-93 Calder Memorial Trophy and the 1998 Maurice Richard Trophy. In 15 seasons with the Ducks, he recorded 684 goals (11th in NHL history) and 773 assists.

“I’m lucky to have played with great people wherever I went in hockey,” Selanne said. The former right wing — nicknamed the “Finnish Flash” — helped lead the Ducks to a Stanley Cup victory in 2007 after scoring 76 goals as a rookie with Winnipeg during the 1992-93 season.

Recchi was a one-time All-Star and three-time Stanley Cup champion who retired in 2011. He logged 577 goals and 956 assists in his career. The former right wing won one national title each with the Pittsburgh Penguins (for whom he played for seven seasons), the Carolina Panthers and the Boston Bruins. Recchi also played ten seasons with the Philadelphia Flyers and five seasons with the Montreal Canadiens. He is 12th in career scoring with 1,533 points.

Andreychuk is 29th in career scoring with 1,338 points in 23 seasons. The 53–year-old Canadian served as captain of the Tampa Bay Lightning’s 2004 Cup team. He retired in 2006 after a 24-year career that included stints with the Buffalo Sabres, New Jersey Devils, Boston Bruins and Colorado Avalanche.

Drake, 88, holds the record for the most victories of any Canadian college coach after leading the University of Alberta Golden Bears to 697 career wins in 28 seasons.

NEWARK, NJ – MARCH 20: Paul Kariya #9 of the St. Louis Blues skates against the New Jersey Devils at the Prudential Center on March 20, 2010 in Newark, New Jersey. The Blues defeated the Devils 1-0. (Photo by Jim McIsaac/Getty Images)
Read more about:
Clare Drake Hockey Hall of Fame Class of 2017 Paul Kariya Teemu Selanne
Listen to the uInterview Podcast!
Get the most-revealing celebrity conversations with the uInterview podcast!