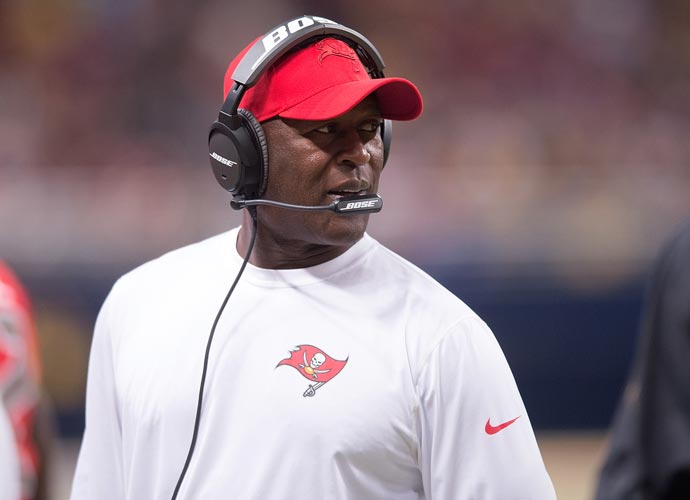 ST. LOUIS, MO - DECEMBER 17: Head coach Lovie Smith of the Tampa Bay Buccaneers on the sideline in the fourth quarter against the St. Louis Rams at the Edward Jones Dome on December 17, 2015 in St. Louis, Missouri. (Photo by Michael B. Thomas/Getty Images)

While most NFL coaching moves this week have been predictable, no one thought that the ax was hanging over Lovie Smith‘s head in Tampa Bay. That ax fell on Wednesday night, though, as Smith was fired.

“After careful consideration, we informed Lovie that we have decided to make a change. I want to thank Lovie for his hard work and dedication to the Buccaneers during his time here. This decision was difficult on a variety of levels,” Buccaneers Co-Chairman Joel Glazer said. “I am disappointed that we were not more successful these past few seasons, but we are committed to doing what is necessary to give our fans the winning team they deserve.   As we move forward, General Manager Jason Licht will oversee the process for finding our next head coach.”

While the team’s record was still disappointing, it was an improvement; Smith and rookie quarterback Jameis Winston took the Bucs fro 2-14 to 6-10

Even the team’s staff was reportedly taken by surprise. “We are all in shock,” one coach told USA TODAY Sports. “None of us had any idea.”

“WTF YO!!!!” linebacker Lavonte David wrote in a tweet that has since been deleted. “This is stupid, we can’t even have a consistent coach, 3 coaches in 5 yrs.”

Offensive coordinator Dirk Koetter is rumored to have an inside track at the job, but no matter who takes over, they will be facing a mixed bag. With players like Winston and Mike Evans, there is certainly talent in Tampa, but that is tempered by impatient ownership.

Photo: Head coach Lovie Smith of the Tampa Bay Buccaneers on the sideline in the fourth quarter against the St. Louis Rams at the Edward Jones Dome on December 17, 2015 in St. Louis, Missouri. (Photo by Michael B. Thomas/Getty Images)