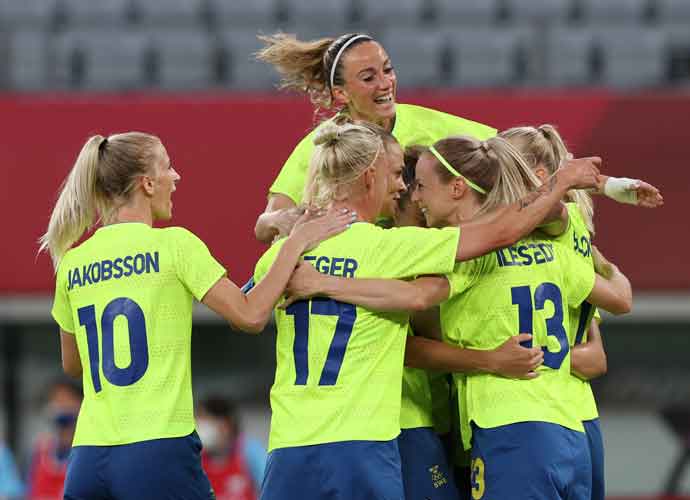 If the U.S. Women’s National Soccer Team hopes to make a splash with another gold medal, they will need to overcome a shocking 3-0 defeat at the hands of Sweden in their opening game. The loss snaps a 44-game win streak for the team.

Sweden has a history of getting the better of the U.S. team. In the 2016 Rio Games, Sweden bested them in the quarterfinals, topping the United States in penalties after regular and extra time found the squads knotted at one goal apiece.

Sweden dominated from start to finish, outshooting the U.S. 10 to 3 in the first half and carrying a 1-0 lead into the second frame. The United States only recorded one shot on the cage while the Swedish squad posted six shots on goal in the first 45 minutes of the game.

Just nine minutes into the second frame of action Sweden doubled its lead.

Stina Blackstenius, who scored vs. the #USWNT at Rio 2016, gets her second of the day to double Sweden's lead

While some lucky bounces seemed to go Sweden’s way, the U.S. had none of them. Multiple shots rang off the post, and the U.S. seemed unable to recover from these misses.

A finish off of a cross from the swing put Sweden up 3-0, sealing the victory.

A great overlapping combination down the right, a perfect ball in and some lax marking. Sweden leads the #USWNT 3-0

The loss marks the first time the U.S. has lost under head coach Vlatko Andonovski and is the team’s first since 2019.

The U.S. will face New Zealand on July 24 and Australia on July 27 to conclude round-robin group play. While the loss does not eliminate the U.S. from reaching the knockout stage, it certainly places a heavy emphasis on the next two games, which now feel like must-win contests.

Stay tuned for more updates on Megan Rapinoe and the rest of the USWNT.