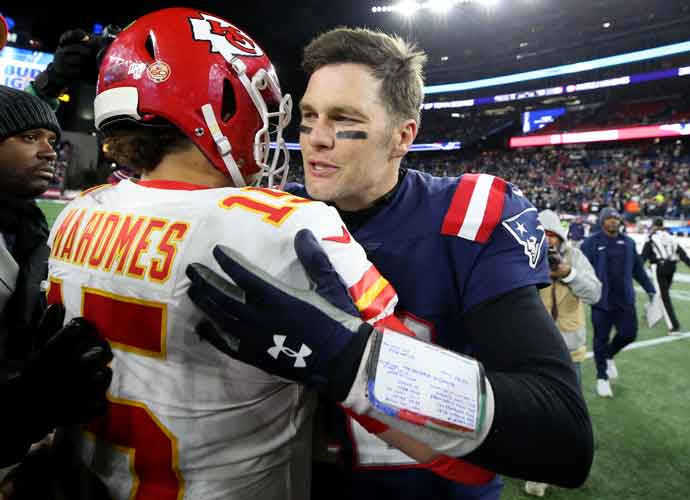 FOXBOROUGH, MASSACHUSETTS - DECEMBER 08: Tom Brady #12 of the New England Patriots talks with Patrick Mahomes #15 of the Kansas City Chiefs after the Chief defeat the Patriots 23-16 at Gillette Stadium on December 08, 2019 in Foxborough, Massachusetts. (Photo by Maddie Meyer/Getty Images)

Super Bowl LV is set and the Kansas City Chiefs opened as a 3.5-point favorite over the Tampa Bay Buccaneers. Vegas must be expecting a shootout as the total opened at 57.5 points, however, several sports books across the country frantically moved the line and total as initial bets were placed. The Chiefs are now 3-point favorites and the total dropped to 56.5.

Although the Chiefs are widely regarded as the better team — and did have a better record than the Bucs this season — Tom Brady will essentially be playing a home game, despite the fact that Super Bowls are scheduled to be played on neutral ground. Super Bowl LV will be played in Tampa, Florida at Raymond James Stadium, home of the Tampa Bay Buccaneers.

On Sunday night, William Hill emailed a media notice that stated nearly 60% of the early action and 90% of the money has been bet on the Chiefs.

A Rematch of Week 12

The Chiefs defeated the Bucs 27-24 in Week 12. Even then, announcer Tony Romo said, ”This could be a preview of the Super Bowl.”

Although the final score was close, this was a classic example of the final score not depicting what actually took place on the field. The Chiefs annihilated the Bucs in this one. If it weren’t for two garbage-time touchdowns by Mike Evans and a Chiefs’ fumble in the red zone, the score very well could have been a blow out.

Patrick Mahomes completed 37 of 49 attempts for 462 yards and three touchdowns. He was masterful and seemed to be one-upping Brady. All three of his touchdowns went to speed freak and All-Pro wideout Tyreek Hill. In the opening quarter, Hill caught a 75-yard bomb and found the end zone again on a 44-yard slant across the middle. By the end of the first quarter, the Chiefs were up 17-0 and nothing seemed likely to slow down that offense.

Hill finished with 13 receptions for 269 yards while tight end Travis Kelce secured eight passes for 82 yards. The only part of the offense that was lacking was the rushing attack. Rookie Clyde Edwards-Helaire rushed 11 times for 37 yards while Le’Veon Bell finished with 22 rushing yards on five attempts.

On the other side of the ball, Brady put together a solid second half, although it was too late. He completed 27 of 31 pass attempts for 345 yards, three touchdowns and two interceptions. Because the team was playing from behind, the Bucs were forced to abandon the running game. Still, Ronald Jones averaged 7.3 yards per carry on his way to 68 yards. Additionally, Jones’ one reception was a 37-yard touchdown pass that put the Buccaneers on the scoreboard. Chris Godwin caught eight passes for 97 yards while Rob Gronkowski broke out in a major way to the tune of six receptions for 106 yards. And Evans secured two touchdown catches in the final quarter to make the score close.

Heading into the Super Bowl, the biggest storylines will be surrounding the greatest quarterback of all time against the greatest signal caller in the game today. Brady and Mahomes will dominate headlines, and rightfully so. The chances of one of them winning Super Bowl MVP is very high, although quarterbacks sometimes get overshadowed by particularly dominant performances. If I had to pick someone to win this honor outside of the two quarterbacks, I would go with Hill due to his enormous playmaking ability.