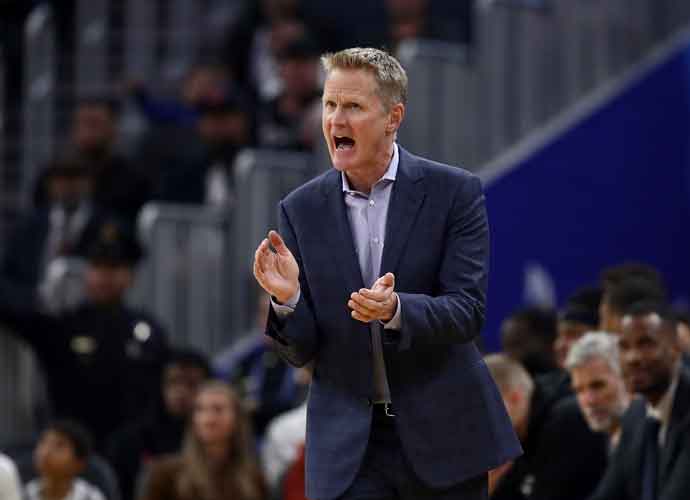 SAN FRANCISCO, CALIFORNIA - JANUARY 14: Head coach Steve Kerr of the Golden State Warriors shouts to his team during their game against the Dallas Mavericks at Chase Center on January 14, 2020 in San Francisco, California. (Photo by Ezra Shaw/Getty Images)

Prior to the Golden State Warriors Western Conference Finals Game 4 matchup against the Dallas Mavericks, Steve Kerr addressed the media, but not regarding basketball. Earlier in the day, at Robb Elementary School in Uvalde, Texas, a gunman killed 19 children and 2 adults, about 400 miles away from American Airlines Arena, the site of Game 4.

Kerr lamented the lack of action taken by legislators regarding the H.R. 8 bill, one that would tighten restrictions and implement background checks for guns purchased and transferred by private parties. The bill had passed the House of Representatives in 2021 but has yet to be brought to the U.S. Senate floor. Kerr has long been an advocate for gun control since childhood. His father was assassinated while serving as the president of the American University of Beirut when he was just 18. This incident caused Kerr to be an outspoken proponent of gun reform laws.

The 8x NBA Champion spoke directly to the Senate Minority Mitch McConnell and other lawmakers in his statement, pleading: “So I ask you: Mitch McConnell, I ask all of you senators who refuse to do anything about the violence and school shootings and supermarket shootings. I ask you: Are you going to put your own desire for power ahead of the lives of our children and our elderly and our churchgoers? Because that’s what it looks like. It’s what we do every week.”

Warriors head coach Steve Kerr gets emotional talking about the mass shooting in Uvalde, Texas that claimed the lives of at least 14 children. https://t.co/xMcnJfVd1q pic.twitter.com/1q9yEA65JA

The shooting in Uvalde, Texas was the third mass shooting in as many as two weeks. This comes after a gunman killed 10 black shoppers at a grocery store in Buffalo, New York, and after a gunman killed one and injured five others at a church in Laguna Woods, California. It also marks the deadliest shooting at a grade school since 20 children and six adults were killed at Sandy Hook elementary school nearly a decade ago.

Other figures around the league such as Dallas Mavericks head coach Jason Kidd and Warriors guard Stephen Curry shared their sentiments and offered their condolences to the families affected. “As coaches, as fathers, we have kids, people in this room have kids, elementary school; you can just think about what could take place with any of your family or friends at a school,” Kidd said.

Kerr also remarked on his growing frustration at the inaction of lawmakers and the continued statements from politicians. Yelling and slamming his fists on the table he expressed, “I’m tired. I am so tired of getting up here and offering condolences to the devastated families that are out there. I am so tired of the excuses, I am sorry, I am tired of the moments of silence. Enough!”