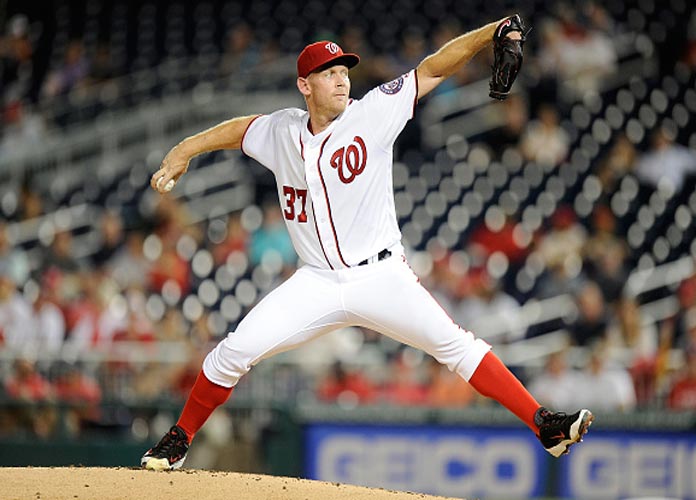 WASHINGTON, DC - SEPTEMBER 07: Stephen Strasburg #37 of the Washington Nationals pitches in the first inning against the Atlanta Braves at Nationals Park on September 7, 2016 in Washington, DC. (Photo by Greg Fiume/Getty Images)

The Nationals defeated the Atlanta Braves, 5-4 in 11 innings in Washington on Wednesday night, although the victory came at a cost: Stephen Strasburg left early with an elbow injury.

With the score tied at 4, no outs and the bases loaded in the 11th, Wilson Ramos smacked a single to left field off Braves right-hander Brandon Cunniff to drive in Jayson Werth with the game-winning run.

“It was important [getting the victory],” Nationals manager Dusty Baker said. “This was a team victory. We used guys that we haven’t used in the past. They came through.”

Strasburg started the game and retired six of the eight batters he faced, but the right-hander exited in the third inning after striking out Mike Foltynewicz. The pitcher felt a pinch in the back of his elbow and will undergo an MRI on Thursday.

“We put him on the DL,” General Manager Mike Rizzo said before Wednesday’s start. “But if it was a different time, he would’ve pitched through it.”

The Braves gained a 4-3 lead in the 10th inning when, with runners on first and second and two outs, Jace Peterson singled to left field off Trevor Gott, scoring Nick Markakis.

After Danny Espinosa and Chris Heisey singled with Jim Johnson on the mound in the bottom half of the frame, Anthony Rendon reached on an infield single, scoring Espinosa.

Washington ended up using nine relievers, who gave up a combined three runs over 8 2/3 innings and struck out 11 batters. Righty Mat Latos won his first game as a National.

“It’s awesome we are able to pull off a great win. It’s close to one in the morning. ” said Nationals right-hander Lucas Giolito, who pitched 3 1/3 innings. “At least we get to end on a high note.”

Foltynewicz delivered a solid start for Atlanta, recording eight strikeouts and holding Washington to one run over six innings. After blasting a third-inning leadoff double that positioned him to score the Braves’ first run, Dansby Swanson homered for the second consecutive night to give Atlanta a 3-1 lead in the seventh.

Braves manager Brian Snitker praised Foltynewicz, a 24-year–old right-hander, after the game, the finale of a three-game series at Nationals Park, which Washington won 3-0.

“He was really good,” Braves manager Brian Snitker said. “He just competed and left everything out there. He’s believing in his stuff and he’s committed to it. He’s just coming along exactly the way we thought he would.”

In the eighth inning, Daniel Murphy tied the score at 3 with a single to left-center field off left-hander Ian Krol, scoring Stephen Drew and Trea Turner. Murphy became the fourth member of the Nationals after Ryan Zimmerman, Adam Dunn and Adam LaRoche, to drive in 100 runs this season.

Before scoring on Werth’s RBI single in the second, Wilmer Difo reached on an infield single that was unsuccessfully challenged by the Braves, who felt Peterson’s throw beat the fast third baseman to the first-base bag. After a two-minute, 37-second review, the call stood.

The Braves (54-86, 5th in NL East) next open a three-game home series against the Mets on Friday. Right-hander John Gant will make his second start for Atlanta since missing nearly two months with a left oblique strain.

The Nationals, (82-57, 1st in NL East) meanwhile, will host the Phillies Thursday night in the first of a four-game series. Righty A.J. Cole will make his fourth start of the season on the heels of his strongest outing yet. Cole shut down the Mets at Citi Field on Friday, allowing only one run over six innings while besting Noah Syndergaard in a Nationals victory.

WASHINGTON, DC – SEPTEMBER 07: Stephen Strasburg #37 of the Washington Nationals pitches in the first inning against the Atlanta Braves at Nationals Park on September 7, 2016 in Washington, DC. (Photo by Greg Fiume/Getty Images)