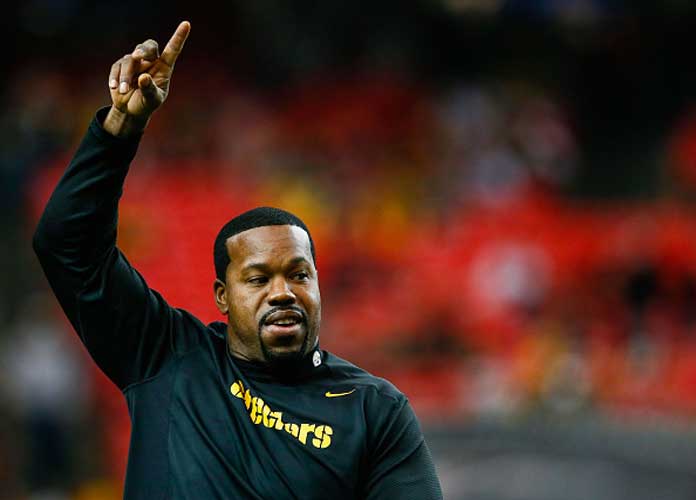 ATLANTA, GA - DECEMBER 14: Joey Porter, a former Pittsburgh Steelers player, walks on the field prior to the game against the Atlanta Falcons at the Georgia Dome on December 14, 2014 in Atlanta, Georgia. (Photo by Kevin C. Cox/Getty Images)

Steelers outside linebackers coach Joey Porter was arrested Sunday night outside a Pittsburgh bar, hours after the team’s 30-12 AFC Wild Card victory over the Miami Dolphins.

Porter, 39, faces aggravated assault, simple assault, resisting arrest, public drunkenness and terroristic threats charges after an off-duty officer, who was working as a security guard at a South Side restaurant, witnessed Porter attack the employee of the nearby bar.

“Once he arrived on the scene, the officer stopped the assault and arrested (Porter)” Pittsburgh police said in a statement early Monday morning.

Porter, a former Steelers player, was taken to the Allegheny County Jail.

Chris Mueller of The Beaver County Times first reported the arrest in a series of tweets Sunday night:

The police car with Porter in it just left. He was put in handcuffs. #Steelers

“We are aware of an incident tonight involving Joey Porter. We are still gathering information as it pertains to the situation, and we will have no further comments until we get more details.”

Porter was released on $25,000 bond and has a court appearance scheduled for Jan. 19.

Porter spent eight of his 13 years in the NFL with the Steelers. He is in his second season as the team’s outside linebackers coach.

Porter has had several run-ins with the law in the past, including a 2010 arrest for suspicion of drunk-driving and an accusation of assaulting a police officer and resisting arrest. Those charges, filed in his hometown of Bakersfield, California, were eventually dropped.

The Steelers will next visit the Kansas City Chiefs on Sunday.

ATLANTA, GA – DECEMBER 14: Joey Porter, a former Pittsburgh Steelers player, walks on the field prior to the game against the Atlanta Falcons at the Georgia Dome on December 14, 2014 in Atlanta, Georgia. (Photo by Kevin C. Cox/Getty Images)

Tua Tagovailoa On Dolphins: ‘I’ve Never Witnessed’ Support Like That