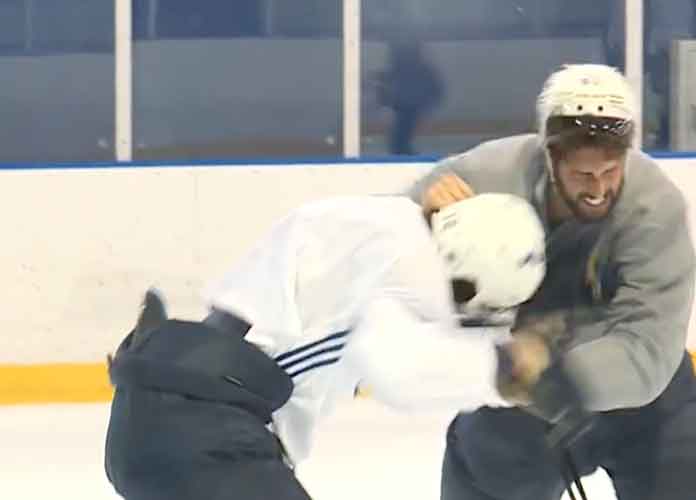 Things are going down in St. Louis. The Blues have been nothing but atrocious. They’ve fired a head coach, lost ten of their last 14 games, and apparently practice in a shopping mall. They’ve only played 28 games.

Now, they’ve even started fighting each other. During practice, winger Zach Sanford and defenseman Robert Bortuzzo started swinging on each other as tensions boiled over mid-drill on Monday. Assistant coaches separated the two and Sanford tried to throw his stick like a spear at Bortuzzo. Here’s the video below.

The Blues have imploded this season. Initially, they were ranked as one of the ten favorites to win the Stanley Cup. Now, they’re boasting a 10-14-4 record. Their odds to win the Cup went from 20/1 to 80/1. The team’s season doesn’t end till April. Any hope that came from a 1-0 win over Winnipeg quickly got shut down by a 6-1 home loss to Vancouver. This fight all but confirms a turnaround wasn’t going to happen.

Sanford was originally drafted by the Washington Capitals. He was traded, along with a 2017 first-round pick and a 2019 second-round pick, to the Blues for defenseman Kevin Shattenkirk.

Bortuzzo is a seven-season NHL veteran. He’s been with St. Louis since 2015 when he was traded for Ian Cole.

Blues interim coach Craig Berube spoke on the ordeal. “That happens. Guys are frustrated and they should be. So sometimes in practice it boils over and things happen, but it’s fine. … I know these guys care. When things like that (happen, it’s) because they do care. They want to be successful, they want to win.”

Hopefully Berube is right and his players won’t have to find a reason to hit each other during practices.

This team is a mess, & no blues teammates jumped in to break up the fight.. #stlblues https://t.co/mLjjdZemrf