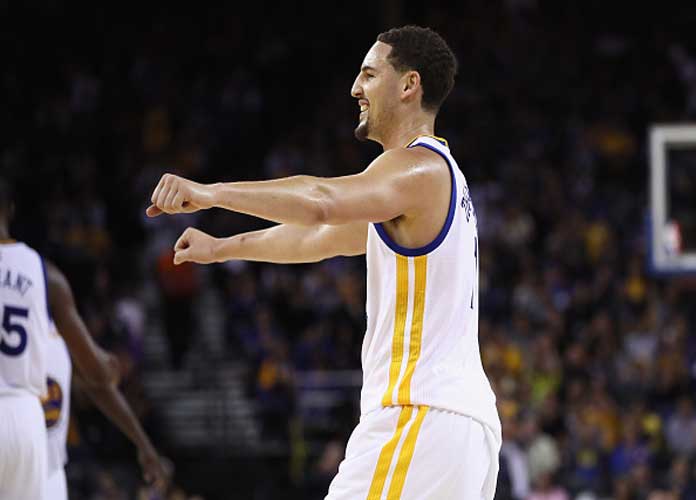 OAKLAND, CA - OCTOBER 04: Klay Thompson #11 of the Golden State Warriors reacts during their preseason game against the Los Angeles Clippers at ORACLE Arena on October 4, 2016 in Oakland, California. (Image: Getty)

Klay Thompson is officially back, as he had 21 points, while reigning scoring champ Steph Curry added 18 as Golden State rebounded from a tough road trip (2-5) to rout the Detroit Pistons 102-86 Tuesday night.

“I had a great time tonight, wish I made a couple more shots, but I just had a great time, it was fun,” said Thompson, who was showered with cheers each time he came into the game—just his second home affair since a pair of injuries and surgeries cost him more than 2 1/2 seasons. “I don’t care if I miss 100 shots in a row, I’m never going to stop shooting the ball. I love it too much and I work too hard not to.”

Returning after a one-game absence (hand), Curry went 6-for-11 with four 3-pointers and eight assists.

“It happens fast,” teammate Andrew Wiggins (19 points) said of the “Splash Brothers’” domination. “They heat up fast. When they do it’s damn-near impossible to stop.”

“It was great,” Warriors coach Steve Kerr said. “That was probably [Thompson’s] best stretch of however many games he’s played. It was good to see him get hot and hear the crowd behind him.”

Golden State hit six of its first nine threes to amp up a 33-22 lead after the opening stanza.

“Once they started seeing shots go in from the 3-point line, they started to get going,” said Detroit’s Isaiah Stewart, who had 14 points and 11 rebounds for the Pistons.

“They are doing plenty of rehab and he is making improvements every day,” Kerr said. “We’ll re-evaluate in two weeks.”

The Pistons visit the Sacramento Kings on Wednesday night, while the Warriors host the Indiana Pacers on Thursday night to continue a seven-game home stretch.