Some Think Kyle Shanahan Is A Lock For Coach Of The Year – But Should He Be? - uSports.org 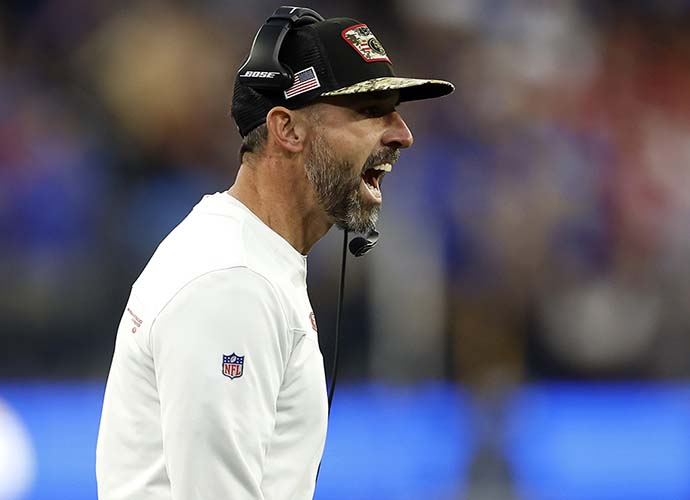 NGLEWOOD, CALIFORNIA - JANUARY 30: Head coach Kyle Shanahan of the San Francisco 49ers reacts in the second quarter against the Los Angeles Rams in the NFC Championship Game at SoFi Stadium on January 30, 2022 in Inglewood, California. (Photo by Christian Petersen/Getty Images)

Some Think Kyle Shanahan Is A Lock For Coach Of The Year – But Should He Be?

Kyle Shanahan has no question done wonders with the San Fransisco 49ers this year – but there are other impressive options that deserve consideration as well for coach of the year.

The coach, who is in his six-season, has helped lead the team to a 10-4 record.

And with a win against division rival Seattle Seahawks, the 49ers clinched the NFC West.

But it’s remarkable how the 49ers got to this point.

First, the year started with starting quarterback Trey Lance, who was the third overall pick in the 2021 draft, suffering a fractured ankle in the season opener

Then to make matters worse, veteran QB Jimmy Garoppolo broke his foot earlier this month and will miss the rest of the year.

That forced the 49ers to turn to its rookie and the last pick in the 2022 draft (also known each year as Mr. Irrelevant) – Brock Purdy.

While Shannahan deserves plenty of credit for designing a system that makes his QB comfortable, Purdy has been remarkable considering what the expectations were.

Also, star wide receiver Deebo Samuel did not play in the 21-13 win – making it even more impressive.

During and after Thursday night’s victory, some fans and NFL pundits took to social media to call for Shanahan to win coach of the year.

49ers looking at 12-13 wins after losing two QBs to injury? Shanahan has to be favorite for coach of the year.

Kyle Shanahan is putting on an absolute master class this season.

He’s down to his 3rd string QB and he’s on the brink of clinching the NFC West.

He should be at the top of the Coach of the Year discussion.

While Shannahan might seem like the favorite this year given the adversity he has had to overcome, some others deserve some love too.

First, it’s important to look at the dramatic turnarounds this year by both the New York Jets and New York Giants, which are both coached by Robert Saleh and Brian Daboll respectively.

Both teams finished last season at 4-13; this year they both already have seven wins and could make the playoffs.

And, of course, we can’t forget about Nick Sirianni and his Philadelphia Eagles, now the top team in the NFL after having a 9-8 record last year.

The 49ers last year were 10-7 and made the AFC championship game.

Given the success of the Eagles this year, Sirianni is currently the favorite to win coach of the year.

VegasInsider currently pegs his odds at -175.

But there’s no doubt that Shannahan should be a part of the coach of the year conversation.