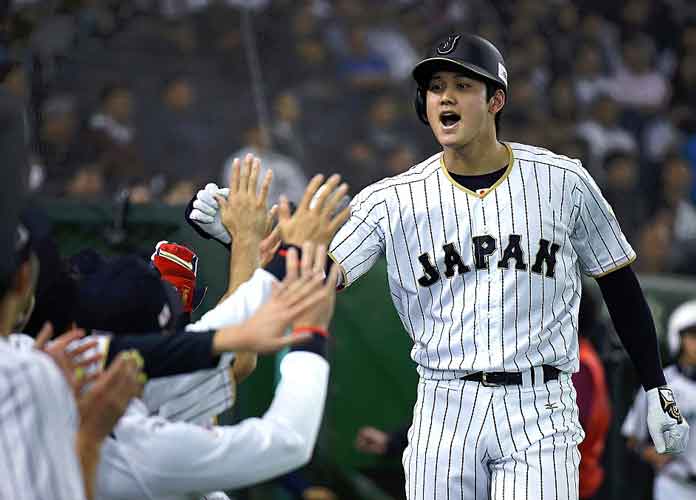 TOKYO, JAPAN - NOVEMBER 12: Shohei Ohtani #16 of Japan celebrates after hitting a solo homer in the fifth inning during the international friendly match between Japan and Netherlands at the Tokyo Dome on November 12, 2016 in Tokyo, Japan. (Photo by Masterpress/Getty Images)

Shohei Ohtani’s night at his own stadium ended early on Tuesday, as the Los Angeles Angels pitcher was pulled after just two innings of the team’s 10-1 loss to the Boston Red Sox due to a blister on his middle finger.

The 23-year-old Japanese rookie pitched only 66 throws. He allowed three runs on four hits, including one to Mookie Betts, who finished with three home runs.

The Angels did not say when Ohtani would next start again or whether he would help the team in another capacity in upcoming games.

“[The blister] had an effect on the overall command of all his pitches,” Angels manager Mike Scioscia told ESPN. “He didn’t say anything in warm-ups about it. …. He got through two innings, but we don’t want it to get any worse. Just make sure you bounce back for his next start, which we anticipate right now.”

Ohtani has reportedly battle similar injuries on the same finger during his time in Japan and that they never severely affected his ability to be ready to play.

Angel Stadium was sold out for Tuesday’s game, with a crowd of 44,822 reportedly in attendance. Ohtani had been coming off eight days’ rest. His scheduled Sunday start against the Kansas City Royals was postponed due to inclement weather.

Here are the full statistics of Ohtani’s performance against the Red Sox on Tuesday. He clearly struggled in his short outing:

Tough outing for Shohei Ohtani vs. the Red Sox:

The Red Sox and Angels face off again in Los Angeles on Wednesday at 10:07pm EST for the middle game of their three-game series. Tyler Skaggs is set to start for the Angels, while Rick Porcello will take the mound for Boston.