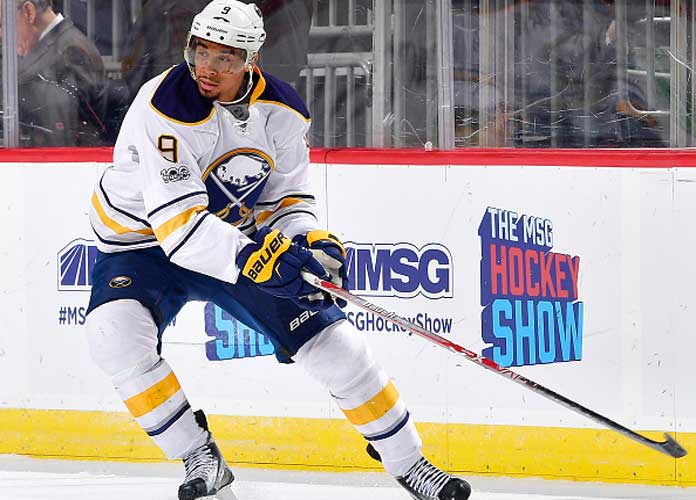 The San Jose Sharks blew a 4-1 lead by allowing three third-period goals and then the deciding goal in overtime to eventually suffer a crushing 5-4 road loss to the Buffalo Sabres on Tuesday.

Sharks coach Peter DeBoer said he sympathized with how the Atlanta Falcons and their head coach Dadn Quinn probably felt after after losing a 28-3 lead to fall to the New England Patriots in overtime at Super Bowl LI on Sunday.

“I felt like Dan Quinn,” DeBoer said. “Thank God it wasn’t the finals. It was a game in the middle of February.”

The Sabres had been booed off the ice after two periods, but after they tied it 4-4 in the third frame with three goals in a span of 3:28, Jack Eichel set up Evander Kane 1:05 into overtime. Kane’s goal was his 16th of the season.

“We get the building going, get some energy in here after they were booing us off the ice, and we win a game in overtime and everyone loves us again,” said Eichel, who had two assists. “It’s interesting how that works.”

Ryan O’Reilly made it 4-2 with a power-play goal 9:03 into the third. Kane followed that 2:33 later by beating Sharks goalie Martin Jones with a wraparound goal.

DeBoer challenged the goal, claiming Sabres forward Tyler Ennis was offside, but video review was inconclusive and the goal stood.

Kyle Okposo then one-timed in Sam Reinhart’s centering pass to tie it 4-4 with 7:29 remaining in regulation.

Then came Kane’s winner, which was set up by Eichel on a 2-on-1. Immediately after his big goal that sealed the comeback win, Kane crashed headfirst into the end boards.

The Sharks seemed to be in total control of the game when Pavelski one-timed in Burns’ pass on a power play to make it 4-1 at 6:07 of the third period.

“It’s just one of those games that for them to come back, everything worked out just perfect,” Pavelski said. “Doesn’t matter how perfect it works, though. You can’t give up that kind of lead.”

The Sharks will next visit the Boston Bruins on Thursday, when the Sabres host the Anaheim Ducks.