OPINION: Serena Williams, The Missing Nomination At ESPYs For Female Athlete Of the Year - uSports.org 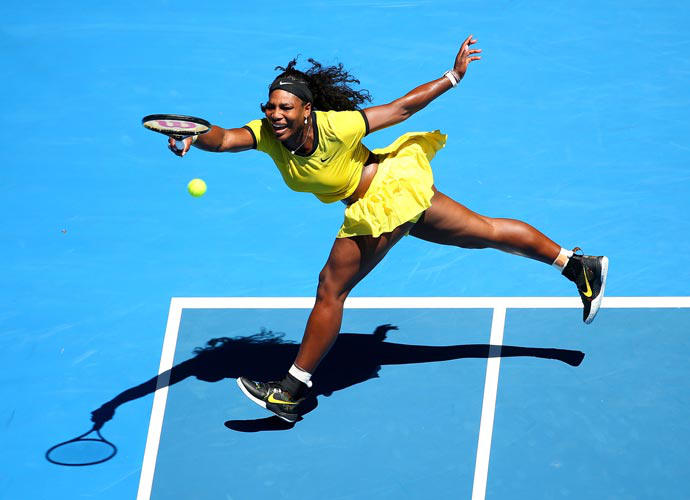 MELBOURNE, AUSTRALIA - JANUARY 18: Serena Williams of the United States plays a forehand in her first round match against Camila Giorgi of Italy during day one of the 2016 Australian Open at Melbourne Park on January 18, 2016 in Melbourne, Australia. (Photo by Quinn Rooney/Getty Images)

OPINION: Serena Williams, The Missing Nomination At ESPYs For Female Athlete Of the Year

The ESPYs are always entertaining, and very often predictable, but this year the Best Female Athlete took me by surprise.  Serena Williams was not even included in the running for best athlete, how could this be when she was named Sportsperson of the Year by Sports Illustrated in December 2015 for having won three major titles and the oldest player to be ranked number one in women’s tennis during the Open Era. She is also known as one of the most powerful athletes of this generation. I’m confused.

Of the four nominees, Katie Ledecky, Simone Biles, Breanna Stewart and Elena Delle Donne, Della Donne was the one that could have been weeded out.

Ledecky is an Olympic gold medalist, nine time world champion and the current record-holder in the 400, 800 and 1500 meter freestyle, and holds the fastest ever times in 500, 1000 and 1650-yard freestyle.  She has broken eleven world records.

Delle Donne was the 2015 WNBA MVP averaging a league high 23.4 points per game and shot 95 percent from the free throw line.  She will be competing in Rio this summer with the women’s national basketball team.

Stewart did win nearly every basketball award possible this past year. ‘Stewie’ has won four national championships, one this past year, went as the first pick in the 2016 WNBA draft, Naismith player of the year award, Wade Trophy, John R. Wooden Award and made the women’s national team to represent in Rio. She finished her career as UConn’s all-time leading scorer with 2,676 career points and 414 career blocks.

Serena Williams at 34 years old is ranked No. 1 in women’s singles tennis. According to Forbes Williams was the highest paid female athlete in the past 12 months raking in $28.9 million in prize money and endorsements. Accolades are great, but Williams is the real deal.

Williams is second only to Steffi Graf in number of consecutive weeks to hold a No. 1 rank, and has tied Graf with Open Era Grand Slam titles.  If Williams would have won four Slams in a calendar year then perhaps she would have been nominated? She certainly beats out Delle Donne regardless.

We can’t underestimate politics in the selection process. Sometimes there is no rhyme or reason why someone is selected, we can only surmise. Williams has been the recipient of Best Female Athlete Award at the ESPYs’ in 2003 and 2013.  She has also won Best Female Tennis Player eight times. Maybe they figured they should share the wealth, but you need to give credit where it is due.

In Stewart’s acceptance she referred to the difference between men’s and women’s media coverage and fame in sports. “I’m trying to understand why we, as professional female athletes don’t receive anywhere near the fame,” she said.

Williams draws as big of a crowd as Roger Federer does.

In comparison to the other three Delle Donne hasn’t done anything ground-breaking this year and Williams deserved to have been nominated.

Breanna Stewart also took home Best College Female Athlete, but even in this category she was among some extremely talented athletes.

Raquel Rodriguez is a decorated soccer player from Penn State.  In 2015 she led her team to win the NCAA Championship, and just two of her most prestigious personal achievements were the Mac Hermann Trophy Winner and TopDrawerSoccer Player of the Year. She now plays for the Sky Blue FC in the National Women’s Soccer League.

Samantha Bricio is a volleyball stand out from USC, and the youngest player to play for the Mexican National team. She was Volleyball Magazine Player of the Year.

Taylor Cummings from the University of Maryland’s lacrosse team and won two of the last four NCAA championships. Sierra Romero playing both shortstop and second baseman for the Michigan Wolverines.  She is the only player in college softball history to score over 300 runs in her career.