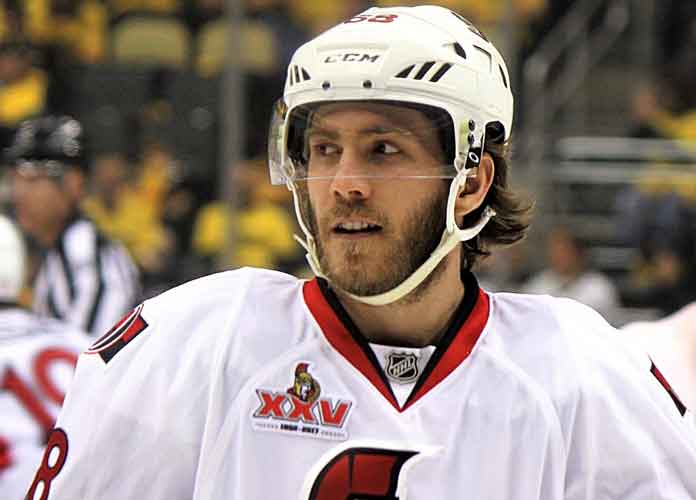 The Ottawa Senators on Tuesday traded winger Mike Hoffman to the San Jose Sharks, who then sent him to the Florida Panthers.

The move comes almost a week after allegations of cyber-bullying were made against Hoffman’s fianceé Monika Caryk. On May 4, Melinda Karlsson — the wife of Senators captain Erik Karlsson — reportedly filed a protection order against Caryk, claiming Hoffman’s fianceé had harassed her online.

Melinda Karlsson accused Caryk of making “numerous statements wishing my unborn child dead” in a series of tweets and other social media posts, according to The Ottawa Citizen.

Karlsson and her husband had a son named Axel in March but he was stillborn, and Melinda reportedly received several offensive messages online after that.

Melinda Karlsson also claimed Caryk used a pseudonym to post the hurtful comments and that she “uttered that she wished I was dead and that someone should ‘take out’ my husband’s legs to end his career.”

According to the Citizen, Hoffman denied the allegations against his fianceé. The Senators, meanwhile, issued a statement saying they would investigate the matter in coordination with the NHL.

Ottawa traded Hoffman to the Sharks for Mikkel Boedker as part of a deal that also saw defenseman Cody Donaghey and a fifth-round 2020 draft pick leave for San Jose. The Senators also got defenseman Julius Bergman and a 2020 sixth-round pick.

The Sharks then dealt Hoffman and a seventh-round pick to the Panthers for second, fourth and fifth-round picks.

Karlson has a chance to sign a new contract with the Senators starting July 1. He could become an unrestricted free agent during the summer of 2019.