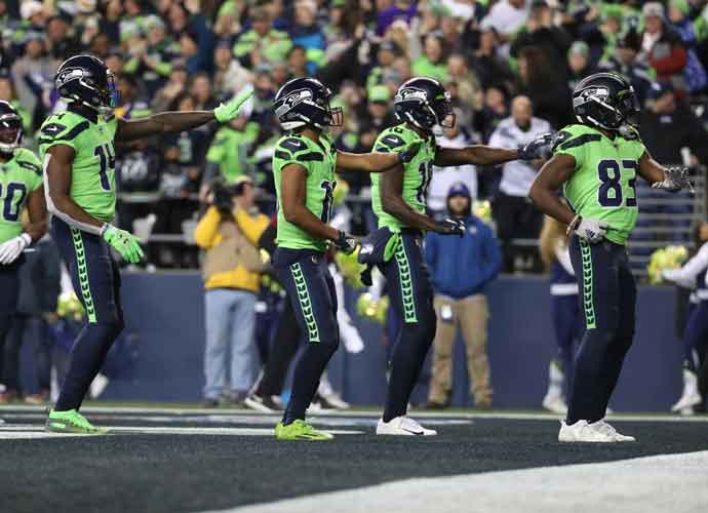 SEATTLE, WASHINGTON - DECEMBER 02: The Seattle Seahawks celebrate after a 60 yard touchdown by David Moore #83 of the Seattle Seahawks against the Minnesota Vikings in the third quarter during their game at CenturyLink Field on December 02, 2019 in Seattle, Washington.

The Seattle Seahawks wide receiving core has made a name for itself in the NFL, however, this reputation they have steadily built this season has less to do with their play on the field and more to do with their celebrations in the end zone following touchdowns. While touchdown celebrations themselves are nothing new, these choreographed dances the Seahawks are performing during games are nothing short of impressive.

This phenomenon really gained a following back in October following a Jaron Brown touchdown; the Seattle wideouts broke into a previously choreographed dance to NSYNC’s “Bye Bye Bye.”

On Monday night, en route to a victory over the Minnesota Vikings, the Seahawks were at it again. After a long, 60-yard touchdown courtesy of David Moore, the wide receivers broke into a dance to the tune of New Edition’s “If It Isn’t Love.”

“It was a group decision (to do that song),” Moore said. “We wanted to go back to old school a little bit.”

Meanwhile, Seattle head coach Pete Carroll was much more concerned with winning the matchup than with his players’ endzone antics.

“Just couldn’t be more excited to have that kind of win and put us at 10 wins, that’s a nice spot for this time,” Carroll said after the game. “We kick it into the fourth quarter and now it’s finish time.”

The Seahawks went on to win the game 37-30, improving their record to 10-2 on the year. With the win, Seattle also takes over first place of the NFC West division. The San Francisco 49ers are 10-2 as well, however, Seattle took the first game over the 49ers back on November 12, a 27-24 overtime win.

The Seahawks will have to face San Francisco again before the end of the year, as well as take on other divisional opponents such as the Rams.

Next Monday night, the Seahawks will travel to Los Angeles to take on the Rams and see if their offense and their dance moves are enough to overpower Sean McVay’s squad.