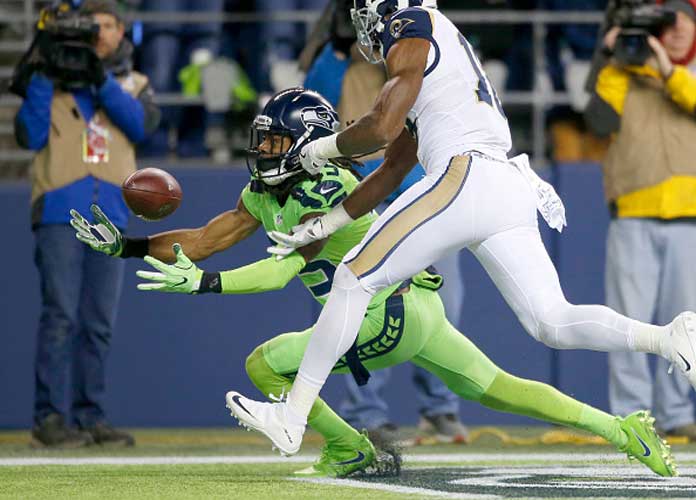 As one of the best defenders in all of football, Richard Sherman has thwarted many touchdown celebrations. But now, after following through on a promise he made a year ago, Sherman is giving a graduating high school senior a Super Bowl sized reason to celebrate.

Last year, Sherman told Richmond, Virginia high school student Hershai James that if she made the honor roll her senior year, Sherman would provide her with a full scholarship to her college of choice. Now, after finishing the school year with a 3.0 GPA, James is ready to go to Norfolk State University and Sherman is more than happy to pay up.

James and Sherman first met at the cornerback’s former teammate Michael Robinson‘s charity dinner, according to the Richmond Times-Dispatch. Robinson’s foundation, the Excel to Excellence Foundation, hosted the dinner and addresses Robinson’s “concern for children that were getting left behind in our society.” James, like Robinson, is a graduate of Varina High School in Richmond.

“At the dinner when Richard Sherman came to me about the scholarship, I was in shock,” James told the TImes-Dispatch. “I believe I said, ‘Really?’ for reassurance. I just felt so blessed to have been given the wonderful opportunity.”

Using the scholarship as motivation, James finished her high school career off strong, maintaing a high enough GPA to make the honor roll.

“When my senior year began, I definitely had the scholarship in my head as motivation,” James told the paper. “With being a senior, the year is really stressful. Having something to look forward to helped.”

After achieving her goal, James reached out to Jonathan Mayo, Excel’s executive director, who, in turn, reached out to Robinson and Sherman. Having remembered the conversation, Sherman, who graduated from Stanford University in 2010, happily obliged.

“It goes back to knowledge is power and if you have knowledge you’re going to be as powerful as you ever want to be,” Sherman told the paper. “Nobody stops anybody from reading and educating themselves. Mike [Robinson] is only trying to empower these kids to be everything that they can be and if we can help with that, with our presence, with our jerseys, with our words, we’ll do everything we can.”

Both parties have decided to keep the amount of the scholarship private. James plans on studying business at the liberal arts, historically black university.

Judge Orders Richard Sherman To Be Released After Felony Charge